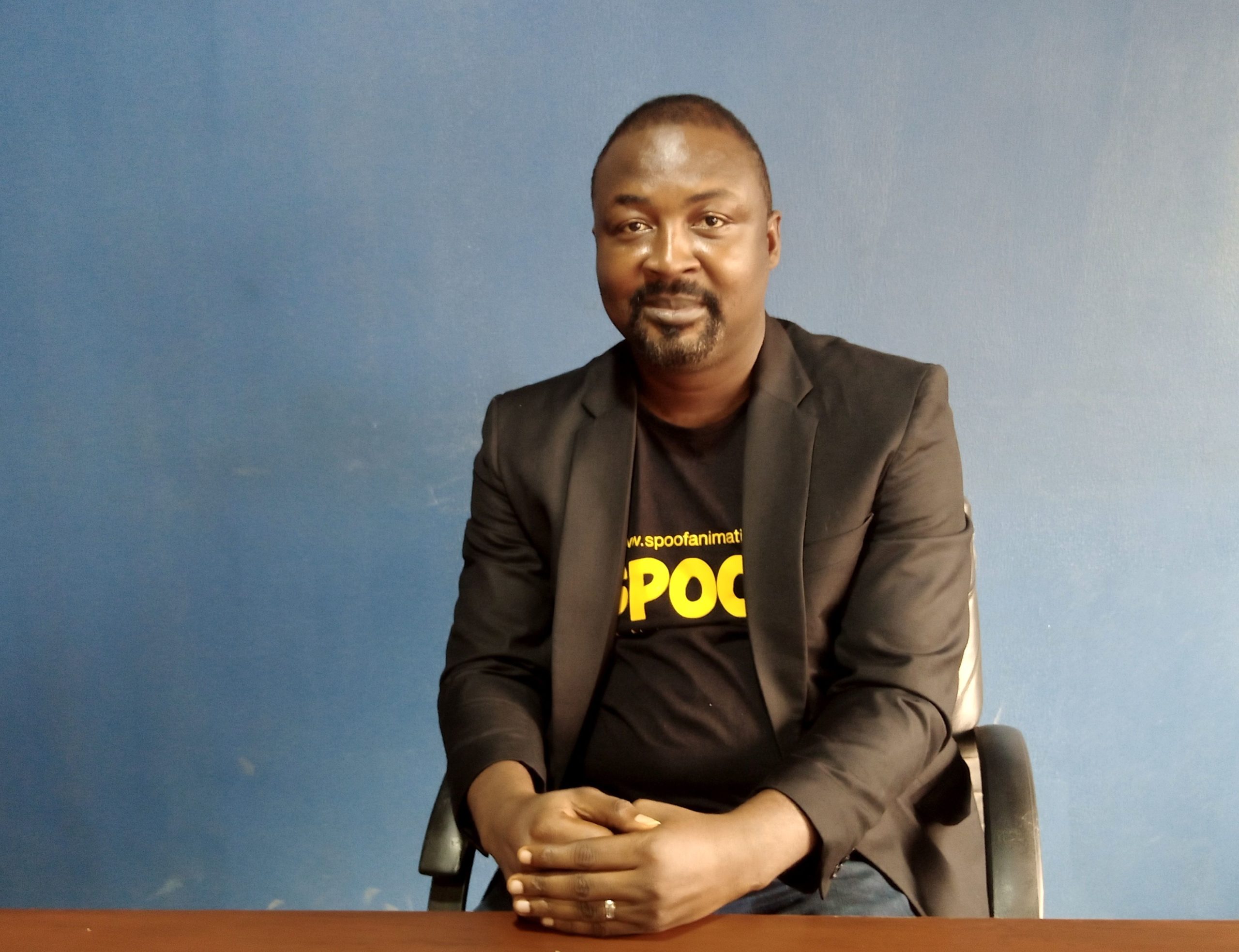 Ayodele Elegba could be described as a determined dreamer but he is better known in African animation circles as a dream-maker. For good reason… he has helped spawn an industry that is now finding its feet internationally.

After a brief stint as a microbiologist, an HIV scare and a bout of depression, Ayodele Elegba quit his hospital job and embarked on an entirely new career as a creative. Now a full-time comic artist, 2D animator and founder of Lagos Comic Con, Elegba might not have made the move if not for a small but scary accident.

“I was depressed for four months. I had mistakenly pricked my finger with the syringe used for an HIV test patient. I was so scared I had got the virus. I immediately had an existential crisis. Thankfully, the test came back negative three months later, but that experience was a wake-up call for me,” he said.

Elegba’s love for comics has since seen him organize Nigeria’s first-ever comic convention, Lagos Comic Con. He has also set up Spoof Animation Studio and Spoof Animation Academy, where he is CEO. 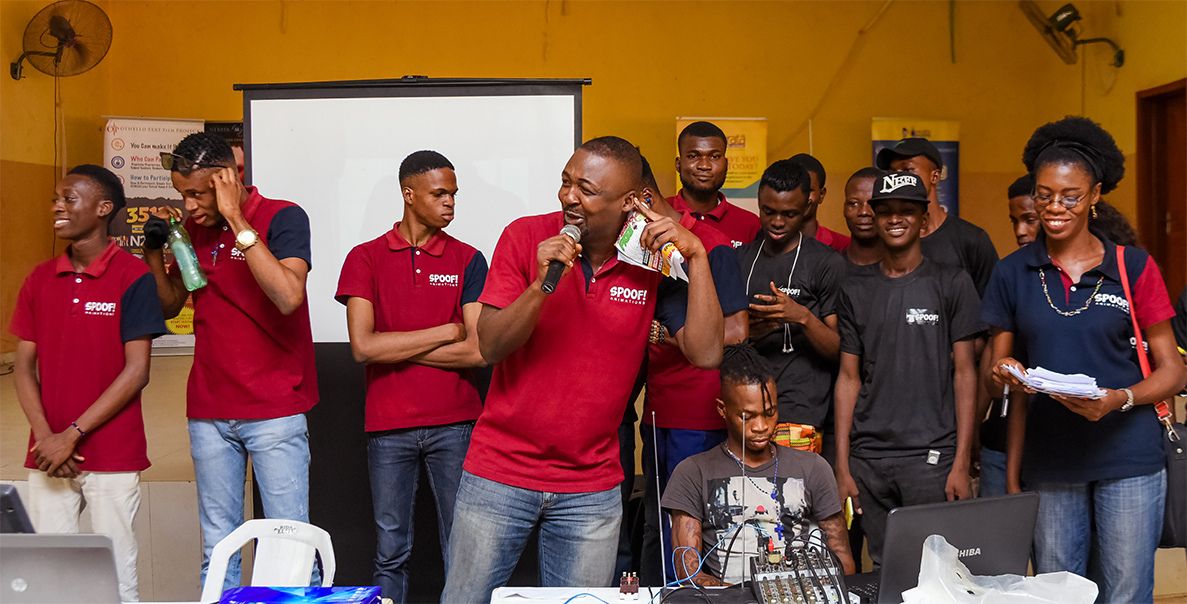 “We have an academy here where we teach people for free. We teach people for three months, and when they become good, we retain them in our studio. Our long-term goal at Spoof Animation Studio is to become a place where artists can always come to make a living doing what they love. Many of my staff see Spoof as an escape,” he said.

Elegba believes Lagos Comic Con is a calling. Next, he wants to “do it big.”

“After I quit my job at the hospital, I knew I had to gain experience doing something creative. I got a new job at my church, Daystar Christian Centre, as an Assistant Broadcast Manager. I learned more about motion graphics and animation on the job. It was refreshing. Now, I make comics and cartoons for a living, and I’m proud of it,” he explained.

In artistic circles, Elegba is known as a dream maker. So it’s not a surprise to learn that he is passionate about mentoring upcoming artists. The professional success of some of the early animation enthusiasts he engaged with has caused a ripple effect in Nigeria’s animation industry, which is now entering a new phase. 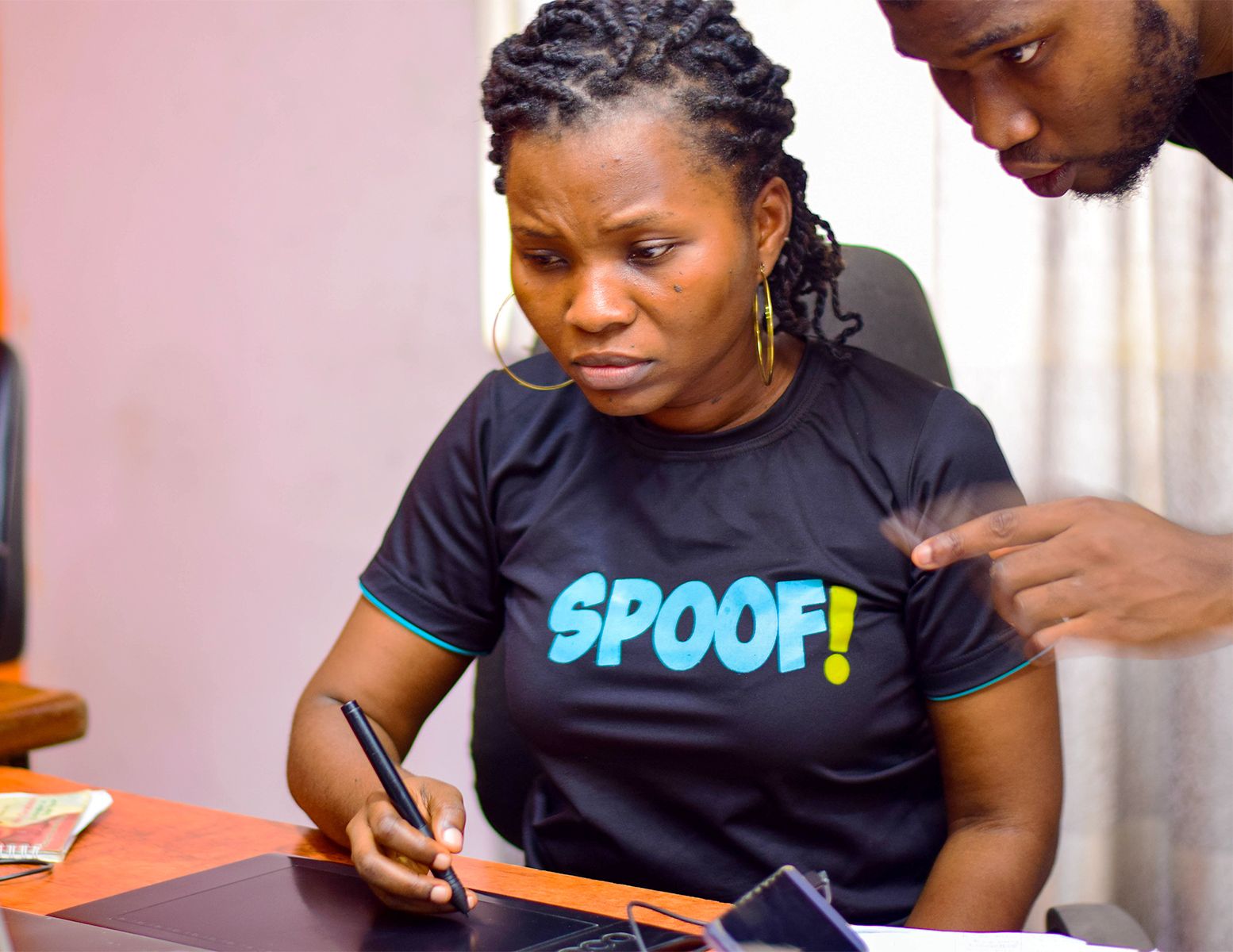 “I’m so elated to know that other artists are doing good. I remember when Kugali first showcased their comics at Lagos Comic Con. Now, they are in partnership with Disney for “Iwájú“. That’s huge! I go on LinkedIn, and I’m happy to see someone post about a deal with Netflix, a new position or a partnership. These weren’t happening ten years ago. I’m glad to know I was a part of the journey that got us here,” he said.

Elegba has also inspired other animation studios to open up in Nigeria, creating safe spaces for a wide variety of artists to showcase their talents.

He does, however, clarify that the Lagos Comic Con is not affiliated with San Diego Comic Con International.

“Lagos Comic Con has no partnership with San Diego Comic Con. This is because I wanted Lagos Comic Con to be very indigenous. We showcase indigenous artists, animators and even have indigenous investors. I want people to know that Nigerians and other Africans are thriving in the animation industry, just like their international counterparts. Lagos Comic Con is a gathering for local artists and animators. A creative space where geeks like myself feel heard and understood,” he said. 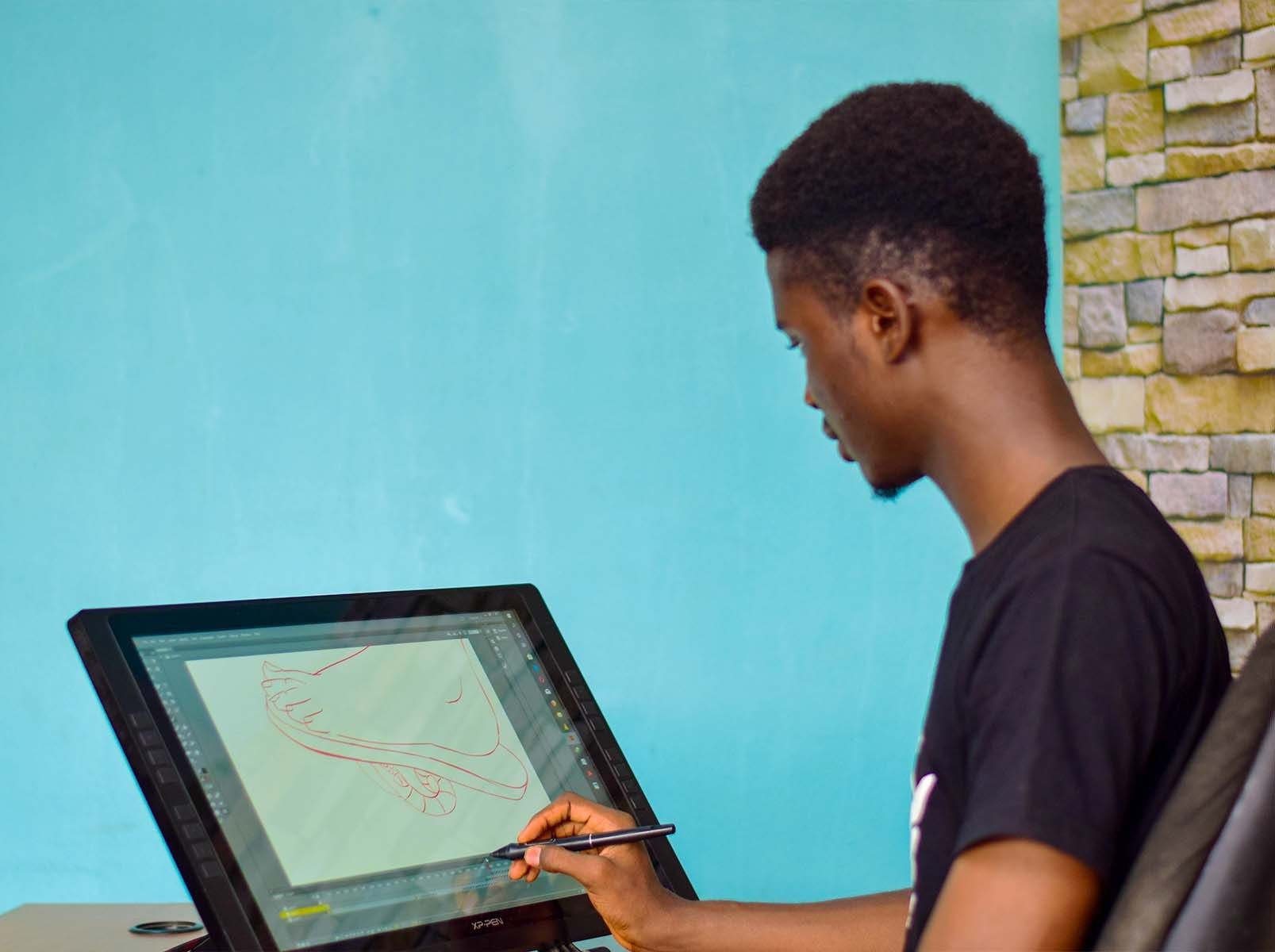 Whenever time allows, Elegba helps creatives chart their own paths. Osas Akugbe is a product of Elegba’s mentorship program. Before becoming the Creative Director of Spoof Animation Studio, Akugbe started off as an animation student in 2014.

He singles out Elegba’s idea of creating Comic Panels – animation workshops that paired budding artists with professional artists and illustrators – as a key ingredient in the success of many young Nigerian animators.

“I spent six months at Comic Panel, learning about sequential art and the animation industry. I got a thorough knowledge of the animation pipeline. Starting as a creative artist was good for my career. I know how to do inking, cleanup, and background art because of the foundational teaching I got at the workshop,” Akugbe said.

Like Elegba, Akugbe also wears many hats at Spoof Animation Studio. Alongside his role as the Creative Director, he’s the Lead Background Artist, specializing in painting.

Courses offered at Spoof Animation Studios include painting backgrounds, illustrations, inking, colouring and 2D animations. By believing in people and giving them access to opportunities never before deemed possible, Elegba has surrounded himself with loyal innovators. These artists want the growth of animation in Nigeria as much as he desires it for them.

His dreams of making the animation industry inclusive have also led him to create yet another event that animators, motion graphics artists, CGI and VFX artists can look forward to, the RendaCon Animation and Visual Effects Film Festival.

Set to be held in Lagos, on December 17-18, 2021, RendaCon will be the first of its kind in Nigeria: Nigeria’s own version of the Annecy International Animation Film Festival. 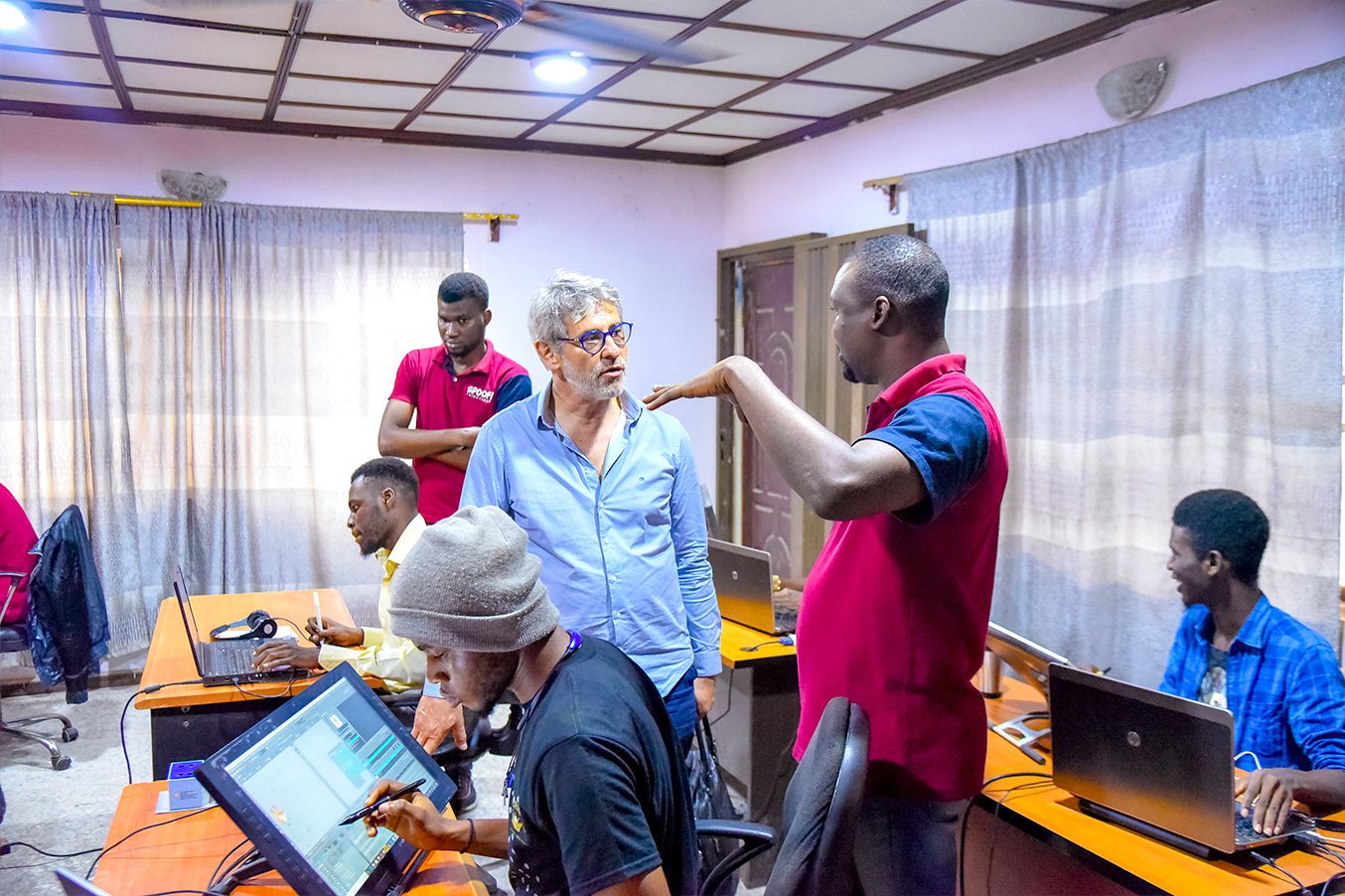 Elegba is currently in talks with The French Institute in Nigeria, hoping to build a partnership with Annecy International Animation Film Festival and get sponsorship for winners at RendaCon to showcase their work at the French animation film festival.

“There are huge possibilities at Annecy Animation Festival. I’ve pitched my content there four times. But it saddens me that few Nigerians are in attendance whenever I go there. Creative people in Nigeria are not being exposed to the myriad of opportunities at Annecy because of the costs of attending the film festival,” he explained.

“RendaCon aims to give talented creators a chance to be seen. Presently, we have over 200 submitted films, and we’re screening them. We hope to sponsor RendaCon winners to showcase their films at Annecy, this is a work in progress. Global exposure is vital,” he pointed out.

Elegba’s influence in animation goes beyond just the industry. He has created a clear public understanding of what artists do and why they’re important. He explained that positioning his studio on the outskirts of Lagos mainland was deliberate.

“I want to reach out to youths who cannot afford to pay for animation school. I’m making myself available to them. Some university students have interned with us and had fruitful careers,” he said.

Elegba’s dream is to leave the door open for new artists and help them find their place in the industry.

“No one did it for me when I started, but I want to help others just coming in because I know how difficult it is to try it solo. There was no YouTube when I started, I had to learn from books. I’m an old-school animator, I care about the basics, so I always tell new artists to go back to the basics. You’re nothing without the basics,” he said. Spoof Animation Studios, apart from impacting the lives of artists, has also impacted the community where it’s located.

“Right now, we’re being celebrated. People now have the consciousness of what animation is. A decade ago, people thought all artists were lazy because we drew all day. People called us bums, saying there was no reward for what we were doing. Now, the case is different. The results speak for themselves,” he said.

His hard work is paying off and he has also attracted some American investors. Now he is looking further afield. He hopes a recent animated series, Ajaka: Lost in Rome, will run on Netflix and ABC and he also plans to venture into IP development, helping animators get distribution deals for their content.

“My dream is to have a big hall with a thousand computers and a thousand people coming in after school, creating for an hour or two and getting paid for it. We’ll get to that point where Spoof will always be there to provide jobs for artists. No one will ever go home hungry because there will be a job waiting for you. Football became what it is today in Nigeria because of parents’ acceptance. That’s what I envision for animation. A career of talent and passion, with good returns for everyone.”