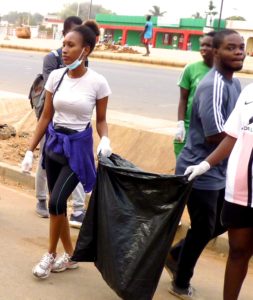 On a Saturday morning in Lomé, the Togolese capital, Felix Tagba stands patiently waiting at a crossroads. Clad in blue shorts and a white jersey, ready with a large black plastic bag and a cane designed to pick up plastic waste, he looks on as other people join him.

Once the crowd is large enough, he takes on a cheerleading role, his shouts loud enough to startle onlookers.

“Eco-jogging for us all!” He shouts, and more than 50 joggers respond in unison: “Eco-jogging to save the environment.”

Shortly after, the group, carrying plastic bags and canes, sets off, as they do every Saturday morning.

This is just one group of a larger movement that has around 1,000 members across all of Togo’s five regions. Each group congregates every Saturday morning for their jog-and-clean-up initiative. They jog while picking up trash, especially plastic bags, which are sent for recycling.

This eco-jogging initiative was launched by Tagba in January 2017, bringing together Togo’s eco-friendly and keep-fit enthusiasts who want to reduce the amount of plastic waste in their communities. 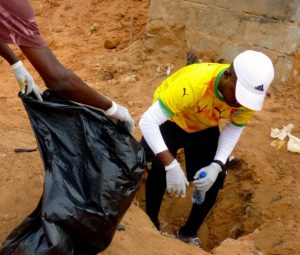 “Eco-jogging is simple. We run or walk while picking up waste. In fact, I think that everyone has eco-jogged once without knowing it because surely you are walking or running and you drop something, then you bend down to pick it up and start walking again,” Tagba explained.

At the end of the four-hour Éco-jogging session, the exhausted joggers gather at the entrance to a recycling unit, located on the outskirts of the Togolese capital. To the cheers of the gathered joggers, the coordinating team of the day deposits the collected trash.

Tagba first got the idea for Ecojoggers during workout sessions in a field where he noticed a lot of trash. This bothered him. He then launched an appeal on social media and people made suggestions. Among these was eco-jogging. So Tagba gave it a shot, hoping his efforts would raise awareness of the dangers of indiscriminate disposal of plastic waste.

“We initiated Eco-jogging because we noticed that there is more and more waste in nature and people do not engage in sports, and we know that sport is good for health, especially jogging,” Tagba explained.

Since its inception, the initiative has collected over 15 tons of plastic waste, most of it sent for recycling.

“The trash we collect, we don’t throw away, we give it another life,” Tagba said.

“When we finish picking up, we use part to make big bags in which we collect the waste, and another part goes to the recycling structures, which transform them into other things,” he added.

Like other major cities in the West African region, Lomé faces a proliferation of plastic waste. While plastic consumption globally has quadrupled over the past 30 years, only 9% of plastic waste is recycled, while 22% is mismanaged.

Whatever we have just done is for our own health, and whoever talks about health, talks about sanitation. We have travelled all over… and it has allowed me to see a bit of the quality of the streets, and their cleanliness gave me a lot of ideas for the future,” Tagba said, clearly excited about the opportunities. 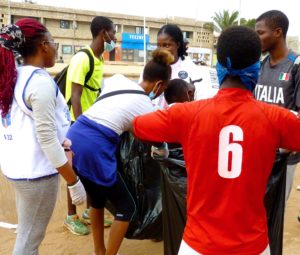 “There are some women today who go to the dumpsite to pick up these plastic wastes to resell. It is already an alternative if people know that we can sell them. It can help fight the spread of plastic waste and keep our environment safe,” Tagba said.

At the fifth session of the United Nations General Assembly on the Environment held on February 28, 2022, in Nairobi, Kenya, UNEA-5 Chair, Espen Barth Eide said plastic pollution was becoming an epidemic. Paradoxically, plastics are some of the most durable products humans have made. Yet, it is often just thrown away.

“Plastic is a product that can be reused, and then reused again and again, if we make it part of a circular economy,” Eide said.

He added that he is “convinced that now is the time to adopt a treaty legally binding to end plastic pollution.”

That statement resonates with Tagba, who maintains that the call is ideally in line with the objectives of the movement.

“I think it’s together that we can win this fight because there is so much waste in our countries that does not benefit our planet and ourselves,” he explained.

“Today, there are countries like Rwanda. If they got there, it is because they took firm measures to fight against the proliferation of waste. Then you have to join forces to get to that level.“ 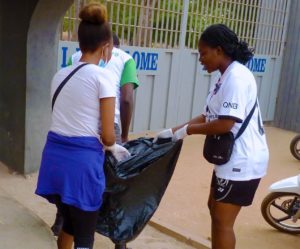 At another eco-jogging event, this time in Agbodrafo, a small town located some 35 kilometres from Lomé, the mayor, who also joined the group, was impressed by what the eco-joggers were doing. He hoped that more could be done to achieve a cleaner environment.

“My main challenge in this town is how to eliminate wild dumps. So eco-jogging can help achieve that, “explained Edoé Guun, the mayor of Agbodrafo.

Tagba has taken his initiative global. Several countries are scheduled to participate this year in the second edition of the Eco-Jogging World Cup, which will take place in Burkina Faso, with over 6,000 people in 18 countries across the world, including Togo, Ghana, Burkina Faso, Niger, Ivory Coast, Cameroon, Benin, Senegal, Chad, Guinea, Mauritania, Mali, DRC, Gabon, France, Belgium, Germany, and the United States of America, are involved.

“We only tried to bring people together through social media, but now every time we put out a call, people come,” said Tagba.

#BNWeekInReview: Relish the Top Stories You Missed on BellaNaija This Week