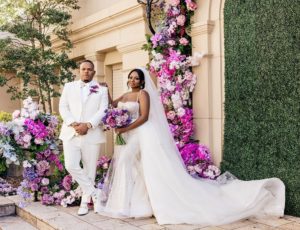 “Power” actress Naturi Naughton officially tied the knot with the love of her life, singer Xavier “Two” Lewis at St. Regis (Buckhead) in Atlanta over the weekend, on April 2.

The officiant was “This Is How We Do It” singer Montell Du’Sean Barnett Jordan, and according to BRIDES, he and his wife, Kristin supported the couple with marriage counselling. Grammy-nominated singer-songwriter Tevin Campbell, performed “Brown Eyed Girl” as the actress walked down the aisle with her father and had the reception bubbling.

Two wore a handmade cream suit by Ghanaian designer Ozwald Boateng, Gucci shoes, and a purple bowtie and boutonnière on his wedding day.

Naturi wore a glimmering Berta gown with a gorgeous bustier and adorable bow ties on the shoulders to the event. To go down the aisle, she added a long overskirt. Zuri, Naturi’s four-year-old daughter, and Two’s niece were the flower girls for the day.

Congratulations to the happy couple.