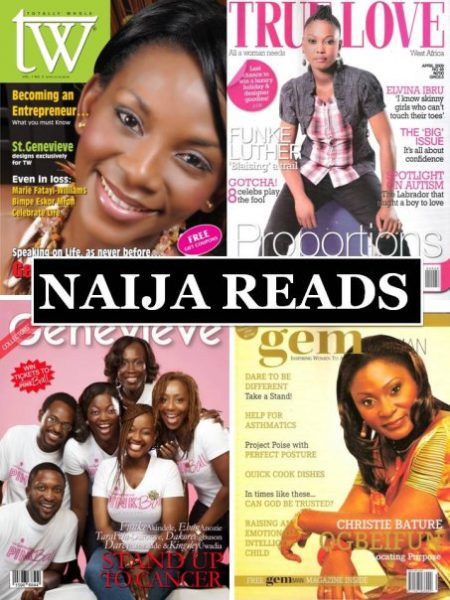 As Bella Naija continues in our drive to encourage young Nigerian entrepreneurs, we are spotlighting the online magazine/book store known as ‘Naija Reads’
www.naijareads.com is a website where African magazines and books can be bought by readers from all around the world.

Why did you start Naija Reads?
The idea for Naija Reads was born out of a personal need for Nigerian magazines. I had just moved to the United States and I really missed our local magazines. So I told my husband who at the time was still in Nigeria to send me the magazines. It was quite expensive. So one day I was going through True Love West Africa’s group on facebook and I noticed that a lot of people were asking about where and how to get magazines in the U.S and that was when I thought of importing and selling Nigerian magazines.

How did you go about sourcing the magazines?
While in Nigeria I was in the media and wrote for a magazine so I knew how to get through to the publishers and so I wrote some of them and kept an eye on new magazines as they sprung out and I would have them shipped to me. I currently sell over 40 titles which include magazines like TW, True Love, Genevieve, Wedding planner, fashion and style magazines and I also have Novels by Nigerians and recently cookbooks.

How do you manage the logistics?
The actual disbursement of the magazines is done from the U.S because mailing from Nigeria costs more and is harder to trace and manage. In order to reach a wider audience, the magazines and books can only be bought online at www.naijareads.com .
Who is your target audience?
African Women; especially Nigerian who are in the Diaspora that are interested in reading about what’s going on in their home land.

How has the response been so far?
The response has been amazing but it could be better. There are a lot of people who have been looking for a way to get the products I sell and people round the world place monthly orders and commend me for what I do and though a lot of people are interested some are taking aback when they see the prices. They sometimes say it’s too expensive and that they buy Oprah’s O for this amount and why should a Nigerian magazine be expensive. But they forget that I have to source and import the magazines, pay import and export fees, pay for my online store, pay for my payment processor and still make a profit so that discourages me sometimes but the encouragement I get from others keeps me going. If it were easy to sell these magazines abroad the publishers themselves would have been doing it but it’s not cost effective for them.

What can potential clients expect from Naija Reads in the future?
They should expect to see more books, magazines from Nigeria and Africa as a whole. A lot of people have urged me to add a music and movie section and though I want to focus on literature that may come in eventually. So watch out for it.