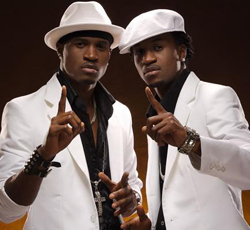 Peter & Paul Okoye, the dynamic duo better known as P-Square are gearing up for the release of their new album tentatively titled ‘Danger‘. P-Square is arguably Africa’s most popular contemporary music group with a catalog of hits including ‘Get Squared’, ‘Bizzy Body’ and ‘Do Me’. As you can imagine, fans cannot wait to get their hands on the new music. The first single from the album is reportedly a track called ‘Super Fans’ which is dedicated to – you guessed it – P Square fans. Other tracks from the album include ‘Who Dey There’, ‘Bye Bye’ and ‘I Love You’. The album will feature guest artistes including 2Face and J Martins. In preperation for the new album release, Peter Okoye has also unleased a new look – fitter and clean shaven. See photos below.

How to Choose your Wedding Dress