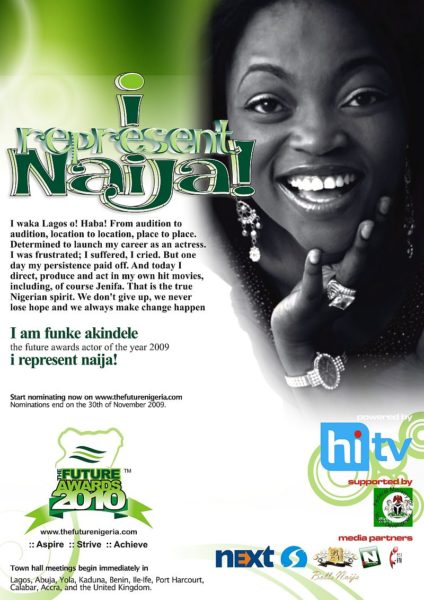 In less than 5 years, The Future Awards has built a strong reputation as a credible and relevant awards event. Beyond that, ‘The Future’ has become a movement aimed at promoting youth development in all segments of Nigerian society. The 2010 Edition of the Future Awards is set to be the most exciting yet! This week, the 2010 campaign was launched in Lagos this week. The iRePresent Naija campaign for 2010 was also unveiled – it features past winners including Funke Akindele, Mosumola Umoru and Cobhams Asuquo.

Nominations for the 2010 awards are now open!
Do you know any young Nigerians between the ages of 18 to 31 who are making Nigeria proud? Doing great stuff? Nominate them! The categories are as follows:

The criteria is simple, really. The Future Awards wants young people who have talent, who have worked hard, and have achieved a good measure of success – in the past five years. Do NOT be afraid to nominate anyone you think deserves to be nominated just because he or she is not popular – in fact those are the kinds of achievers they are looking for.

‘The Figurine’ aims to propel Nigerian cinema to new heights