Last week, we kicked off an exciting  series on women of African heritage that have been killing it on the international red carpet by featuring Nigerian model Tolula Adeyemi.
Read Post Here

This week, we continue with Somalian supermodel, mother, actress  and entrepreneur Iman Bowie.

Iman began her career as a model in 1975 when she was discovered by American photographer, Peter Beard while as a student at Nairobi University. Subsequently she moved to the United States to pursue a modelling career. Her first modelling assignment was for American Vogue in 1976; her appearance in such a prestigious magazine challenged the prevailing notions of beauty and opened the door for other women of colour in the fashion industry.

Iman’s striking features made her an instant success in the fashion industry; becoming a muse for several fashion designers including Yves Saint Laurent, Calvin Klein, Donna Karan, and Versace. In her fourteen year career as a supermodel model she worked with the top photographers including Helmut Newton, Richard Avedon, Irving Penn, and Annie Leibovitz walked the runway for the most influential designers and covered countless magazines.

After a successful career as a model, she went on to start her own cosmetics line; IMAN Cosmetics which was the first cosmetics and skincare collection designed for women of colour. She launched an accessory line IMAN Global Chic and has written two books; I AM IMAN (Universe, 2001) and The Beauty of Colour: The Ultimate Beauty Guide for Skin of Colour (Putnam Adult, 2005).

In addition to running her global beauty company, Iman is also actively involved in several charities, acting as the global Ambassador for the Keep a Child Alive program as well as working closely with the Children’s Defense Fund. She is currently the host for Project Runway Canada.

Iman believes style is about longevity; being able to stay true to yourself and also, being “classic”. She considers accessories as “the stars of our wardrobes” and she is all about more, but with the notion of balance in check!  Her red carpet style is consistent; as she always wows with the dresses; highlighting her enviable figure and the lush of her ever glowing brown skin! 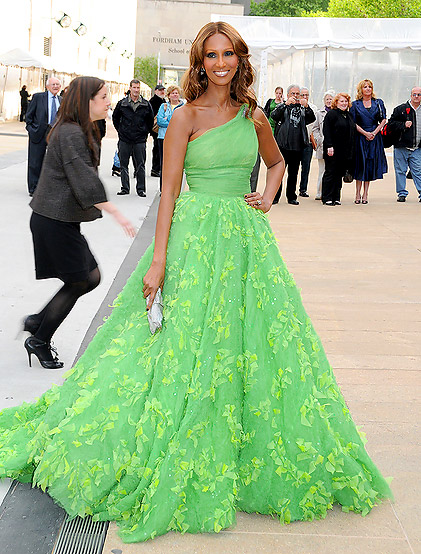 Iman looks AMAZING in this dress. She is styled to perfection, her make-up is flawless and so is her skin. She pulls off this dramatic piece graciously. 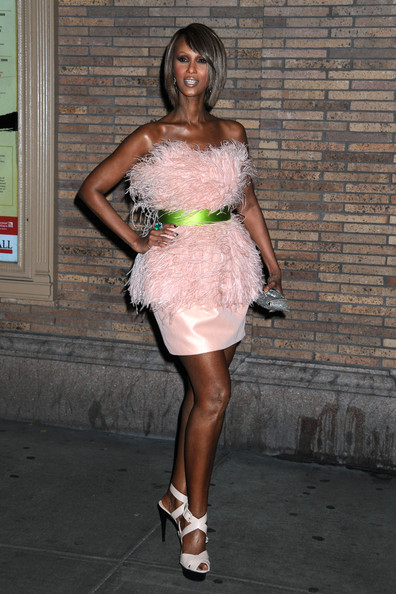 This is a fun look for her.  The feathers, the flirty short length and her side swept bob make it very contemporary. 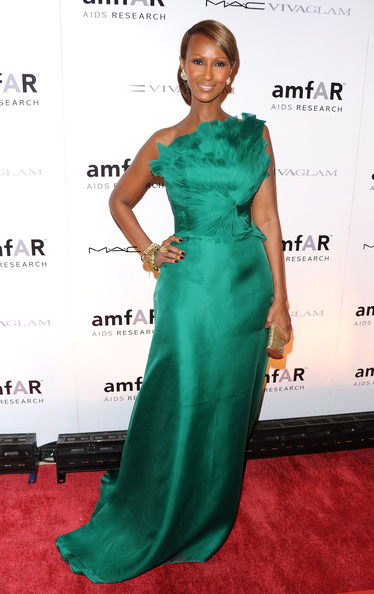 Iman loves her some colour green and I am guessing it’s because it looks great against her skin. Here, in minimal accessories, she ensures her dress is the primary focus of the look as she also has her hair pulled back, so it doesn’t compete with the panel details on the bodice. 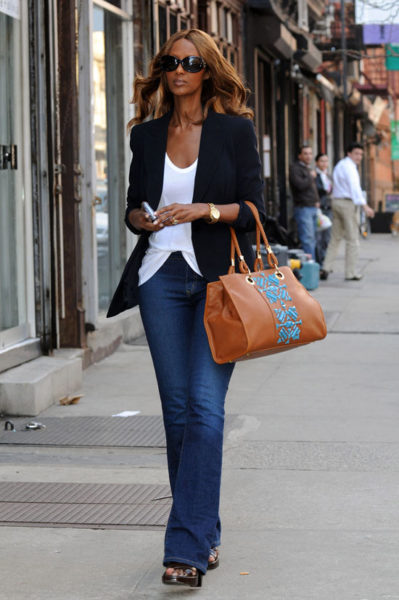 This is casual Iman and don’t you just love the look; jeans, a simple white tee and a blazer…nothing fussy yet very chic in the city! 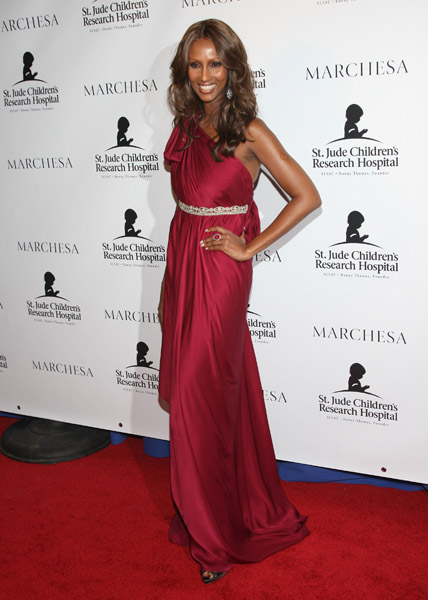 Iman wows in this red dress, her hair and make-up is always on point!

Iman sparkles in this plunging dress. Does this woman ever age?

This dress gently skims through her delicate curves and emphasizes her enviable figure. It’s an elegant choice for her! 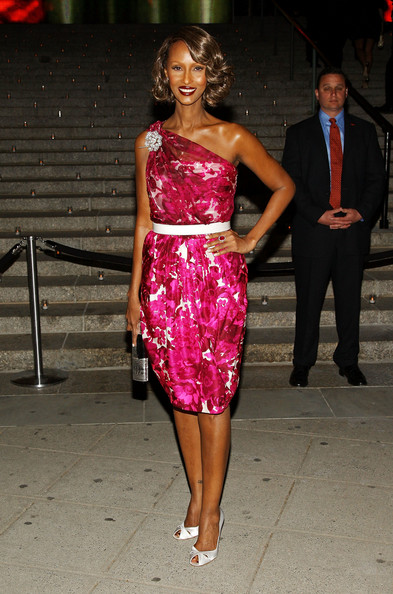 This is a very pretty dress! The pop of colour, the floral print and the brooch on the shoulder. This is a soft feminine look on her. 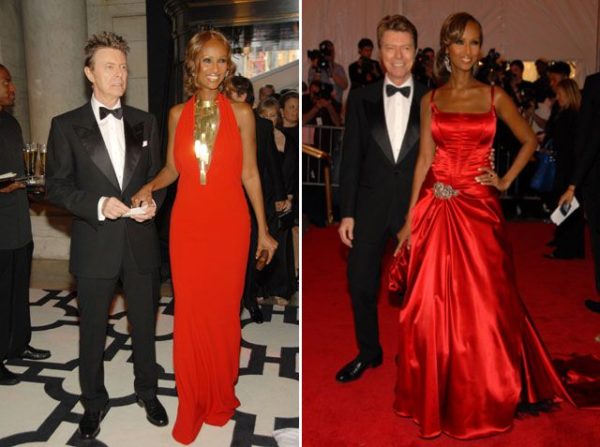 It seems as though Iman favours ravishing red when she is out with husband, rock legend David Bowie. The colour is stunning and totally complements her glowing skin. 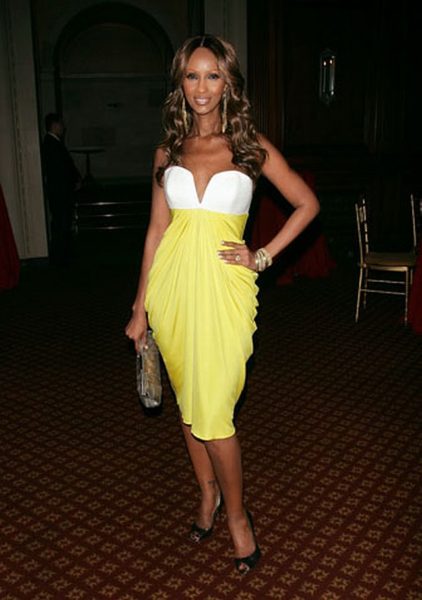 Totally love this dress on Iman. Its a strapless deep-V yellow-and-white dress. The simplicity of the design and the draping totally work for Iman’s statuesque figure.

I like how Iman wears shorter length dresses.  I particularly like the tulle bow detail on this dress, which she combines with a sleek bob. 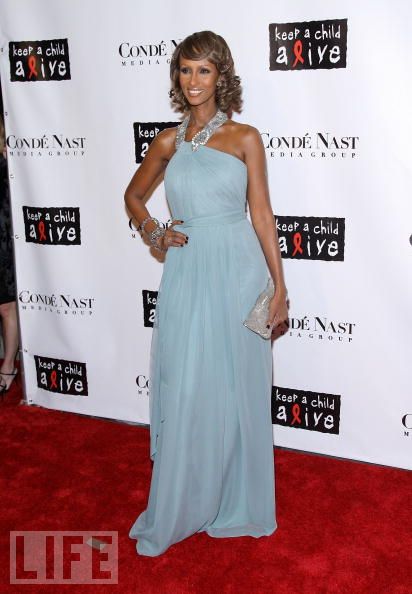 This is typical Iman on the red carpet; a stunning dress and a superb finish!

Her beauty radiates in every dress she wears. It’s always understated glam with Iman.

Is it your Money? The Eldee Interview

The Gold Digger in Me