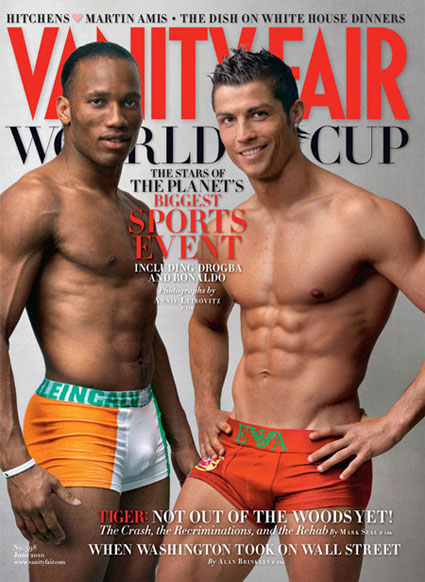 Someone get us Didier Drogba‘s publicist! A week after appearing on the cover of Time Magazine’s 100 Most Influential People in the World 2010 edition alongside Former US President Bill Clinton and Music phenom Lady Gaga. Ivory Coast International, Drogba is one again in the spotlight, he shares the cover of Vanity Fair with Portugal’s Cristiano Ronaldo. The cover photo and inside spread were shot by legendary photographer Annie Leibovitz. Other football stars featured in the magazine are Cameroon’s Samuel Eto’o, Ghana’s Sulley Muntari, the U.S.A.’s Landon Donovan, Brazil’s Kaká and Pato, Italy’s Gianluigi Buffon, Serbia’s Dejan Stankovic, England’s Carlton Cole, and Germany’s Michael Ballack.

The men were wearing ‘patriotic underwear’ designed with inspiration from their  respective country’s national flags . As we gear up for the 2010 World Cup being held in South Africa, anticipation all over the world has reached a fever pitch. Can’t wait! Our thoughts on the shoot? We love it on so many levels! We are glad to see our Africa superstars get mainstream global recognition and of course, we have to admit that they look very fit!

Behind the Scenes at the Vanity Fair Shoot