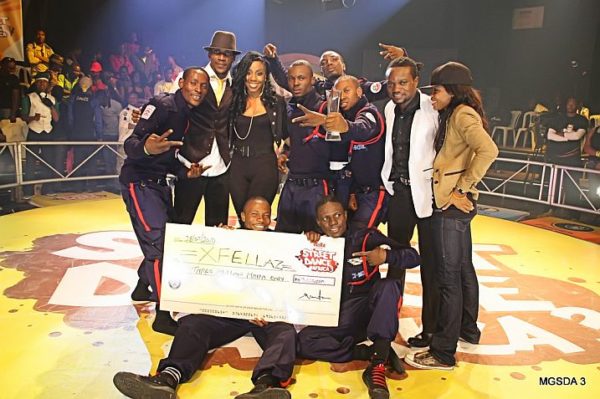 The type of expectation and anticipation, the deer feel for water after savouring a delicious meal, to quench its thirst, was exactly the type one could use to describe the mood that pervaded at the final of the Malta Guinness Street Dance Africa Championship.

Prior to the finals, ‘WATCH IT’, ‘MARKSMEN’, ‘SONS OF LIBERTY’ and ‘SOULJA GUYS’ got eliminated while ‘X-FELLAZ’, ‘FLAMES INSPIRED’, ‘LEGACY’, and ‘EYES6ONE’ made it to the final.

A distinctive feature of this year’s MGSDA was that all eight crews drawn from the four regions were put in a booth camp where they were groomed by professional dance trainers as well as given different tasks and challenges to perform as the competition progressed.

The stage was set for the long awaited finals as the trio judges of FRANK, KAFFY and the Chief judge WALE RUBBER were ushered in by the MC impresario, Deji Falope, who wished to further bolster the judges decisions, and went on to introduce “MAY 7” a Nigerian UK based female dancer and dance instructor who happened to be the only female dancer in a dance group of twenty. 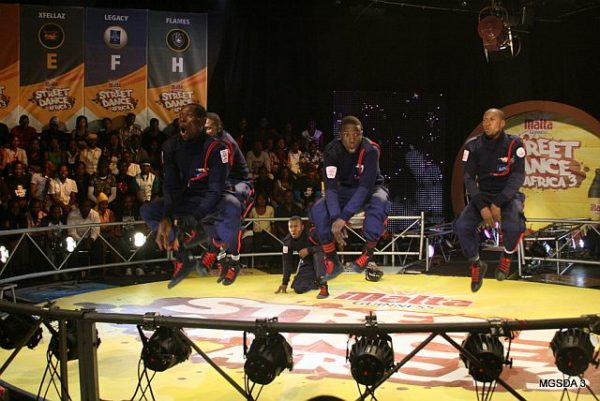 The Final showdown kicked off with “EYE6ONE” performing with “MO CHEDDAH”, using the sound track “KOMA ROLL” as they thrilled the audience, exuding energy that synchronized very well with their expression. However, their performance was faulted on the ground of poor ‘popping’ that was seen to be too draggy, which showed some technical flaws. “Generally it was a good performance even though there were some rough edges” May 7 said.

Next to perform on stage after “EYE6ONE was “FLAMES INSPIRED” performing with “DJ ZEEZ” with the popular hit track “FOKA SIBE”. It was a mind blowing performance as the introduction of “DJ ZEEZ” on stage was too apt and thrilling, the audience could not but scream with a great deal of ecstasy. “You guys are very fast and smart because you paid attention to the co-ordination of the synergy between the dance and the music” Kaffy said. The performance of “FLAMES INSPIRED” could be felt by all as they succeeded in using “DJ ZEEZ” to the sheer satisfaction of the judges as their performance was described by the judges as awesome, brilliant and adjudged to be simply flawless.

The bar was obviously raised during the performance of “FLAMES INSPIRED” but whether this could be surpassed was the question in the minds of the audience as “X-FELLAZ” stormed the stage to perform with “KLEVER JAY” a.k.a “KONI KONI MASTER” as they performed to his popular hit track “IGBORO TI DARU”.

They however did not disappoint their fans as they succeeded in raising the bar even higher than expected. This they did by displaying a high level of technical dexterity, coupled with a well formed pyramid from the stage floor to the roof of the venue, it was indeed awesome. After they performed, May 7 was forced to say that she was speechless and that she was blown away by their performance.

“LEGACY” was last to perform in the first round as they performed with the “ ROOF TOP MC’S” thrilling with the popular “LAGIMO” track amongst others which saw their performance having too much in just one piece. It was in this same light that Kaffy harped on saying “I feel the transition you created did not really jell for us to see the life in your performance.

The second round commenced with “EYE6ONE” performing. They performed to the best of their ability as opined by one of the judges but were faulted on flat beginning that went through till the end of their performance. “Never toil with the soul of the music because it is the vessel your dance rides on”. This was the comment Kaffy made by telling “EYE6ONE” that they had dangerous stunts but the music was not carrying that kind of performance they exhibited.

A Major contender of the MGSDA III diadem, “FLAMES INSPIRED” came on stage again to surpass their previous performance and this they did using the basket ball as their major crump as they dunked and slammed the judges of their feet with exceeding mind wowing performance.

“X-FELLAZ” had the last chance to create an impression on the minds of the judges that they deserve to be crowned champions of the MGDSA III as they came on stage for the last time to perform. They performed with precision, straight to the point and entertained in all aspects. It was a great performance laced with zeal of wanting to win. After they finished, Wale said “this is a street dance performance”.

Lastly for the second round performance “LEGACY”, who were very daring in all aspects, raised the bar in their performance by challenging themselves one more time.They were so systematic in the way they finished each move that led them straight to the next one without actually faulting it. This, FRANK could not contain but to say “UNA TOO GBASKY”.

After the crews were done with their last performances and were awaiting the results, the MGSDA Season II Champions, “STREETHOOD” came and presented before the crowd an exit performance, while the judges were busy with the task of determining who the winner would be.

At the end of the exit performance by “STREETHOOD”, the Chief Judge of the MGSDA Season III, WALE RUBBER presented the result of this years’ MGDSA III Winner to Deji Falope.

After a heart thumping wait for the results, “ X-FELLAZ” two times runner up of the Malta Guinness Street Dance Africa Competition emerged champions of this years’ competition while “FLAMES INSPIRED”, “LEGACY”, and “ EYE6ONE” came behind in that order.

To this end, “X-FELLAZ” as Dance Champions of Nigeria will be representing Nigeria in the Pan Africa Dance final that will be coming up in Ghana later in the year.

The grand finale was a spectacle to behold as lots of creativity, thrills and fun fare were exhibited by the crews who put up extreme ‘Top of the World’ performance which made the Malta Guinness Street Dance Africa III Competition an event full of fun and goodness for every one.

Visit www.mgstreetdanceafrica.com or facebook Malta Guinness-Top of the World Goodness for more information and updates.