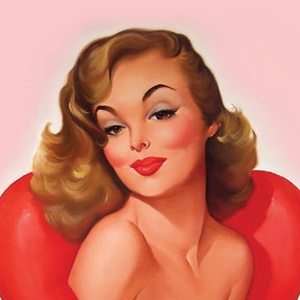 I mean seriously, in this town, who wouldn’t wanna be a ‘Kept Woman’?!!

The weather is HOT; the traffic is like an aggrieved debtor who harasses you everywhere you go demanding payback!! The market (whichever one you find yourself) is tight and competitive, leaving the chances of survival open only to the glamorous and fit.

Receiving the opportunity to be a ‘Kept Woman’ in Lagos is almost the same as having your number called out on the Lotto!! It is the way out for many a starving or just merely ‘long-throat for bigger things they can’t afford’ girl’s problems.

So the same way you see tons of hopefuls queuing up outside the local Lotto kiosk, is metaphorically the way thousands (or millions) of young Nigerian girls mentally, physically and spiritually queue up in the long line of prospective ‘Kept Women’.

The race for being a ‘Kept Woman’ is tight mehn…and girls are not smiling at all!! Real life statistics have shown that the very light-skinned, human hair reaching down to the waist females are more likely to attract the Keepers than any other physical demographic.

This is not to say that every single light-skinned, long human hair wearing female you see is a ‘Kept Woman’ or ‘Kept Woman Wannabe’, but it’s actually more the rule than the exception.

So every other day, Hair Stylists, Bleaching cream practitioners and the New generation pimps are besieged with endless strings of girls looking to become the standard ‘Kept Woman’ prospect, or to be connected with a potential Keeper.

A few weeks ago, I met one of them.

She is almost ‘oyinbo’ in complexion; achieved quite obviously (as seen under very bright light) with the help of certain bleaching creams. The hair cascaded down her back, curled in the way only 8hours (or more) of Bendy rollers can achieve, with her Flamboyant style leaning heavily toward making a lewd statement through her outfit.

We got talking, and then I asked the inevitable question: “What do you do?”

Pause. Then smile and enter into baby-doll position.

The laughter erupted from my belly before I could even think of restraining myself. Then I went further into being a nuisance by blurting out to her: “I hope you have a tight Retirement Plan cos that’s a FULL time job!!”

Thank goodness, she didn’t get the joke.

Diva is used inter-changeably with the term ‘Kept-Woman’ in urban Lagos lingo, so what my acquaintance was saying in essence, was that her ambition is to be a Full-blown ‘Kept-Woman’!! Enough of all the small-time play she’d been doing on the side; now she is ready to go fully into the Business for a TAKEOVER!!!

As hilarious as my acquaintance’s ambition was to me, I couldn’t help feeling a little sorry for her. She is a very likeable person, who somewhere deep inside her I know has genuinely good intentions, but has just been misled.

I believe in people taking the best steps in whatever choices they make in life, whether I consider those choices to be positive or negative. I realize the level of naivety that is present in many ‘Kept-Woman’ Wannabes and so felt compelled to write this article as a sorta guide to them on the different opportunities available for prospective ‘Kept-Women’ here in Lagos.

I mean the least I can do is to help them shine their eye well-well as they enter into this cutthroat world of DIVAS.

So here are the different levels and opportunities available for ‘Kept-Women’ in Lagos; I have divided them into the ‘Above-the-line’ and ‘Below-the-line’ levels:

Full-time Mistress: This is actually the dream of most ‘Kept-Woman’ wannabes (maybe the very smart ones), and it’s very straight-forward. An extremely wealthy, married guy selects you from the tons of women he has available at his disposal, and establishes YOU as his sole Mistress. He might have other chics on the side of course, but there is no contention of the fact that the only person that has anything above you is the ‘Mrs’.  You will be established in a house or apartment, possibly given a Chef or any other range of servants you want, a huge, steady allowance and a luxury car (and driver). You will be known and respected among his immediate circle of friends as being his No. 1. He may even take the liberty of going out with you in public sometimes, and at those times, you’d probably even forget that you’re not the ‘Mrs’. It would not be unusual for him to want children from you; he will be that into you. However, the children will NEVER share the benefits of the children from the ‘Mrs’. They will NEVER be on the front page of the glossy magazine with him, when he is being celebrated as a ‘Model Nigerian’. They possibly wouldn’t get a mention in his will, as well as you. You will always be a shadow; alive only for the meeting of the needs of your Keeper. No matter how successful you are in whatever you choose to do (should you choose to pursue a career); the stigma of being a Mistress would always follow you. All desires to one day have a family of your own, in which you do not need to hide or be ashamed of who you are, will gradually ebb out of your heart, until being a Mistress is eventually all you can ever aspire yourself to be.

Part-Time Mistress: The part-timeness of this level is on the part of your Keeper and not on your part. He has tons (or a handful) of Mistresses possibly even in the same city. You will be just one of them. He probably has a set Budget he has established for the ‘setting-up’ of each of them, and so when he decides to extol upon you the benefit of being one of his Mistresses, he’ll just set you up as he has done for everyone before you. You’ll have the nice apartment, car, staff and also an income, but don’t expect him to go out holding your hand in public. He comes to you whenever he wants and leaves whenever he wants. You’ll probably even have a day that you and everyone around you have marked ‘His Day’, and so no matter what comes up on that day, you have got to make yourself available for him. You will be very aware that your Keeper has other ‘Kept-Women’ like you, so you’d ALWAYS have to keep your game tight, to make sure he doesn’t get bored with you and drop you off like a fly. You’d also need to be aware that his darting eyes are always on the look-out for the next Wannabe he can add to his fleet, so my advice to you is to acquire all you can while his attention is focused on you, so you don’t become a sad story when he does meet the new acquisition. He most likely will be very possessive and would FLIP if you as much as looked at another man, so any under-G you might want to do while you are with him would have to be extremely coded.

All-Rounder: In this instance, you are a ‘Kept-Woman’ for not one, but a number of Keepers. You can call them whenever you want; to have your needs met. If you need an apartment for example, except you’re really fortunate, don’t expect that you’ll get all the money from ONE of them. You’ll probably need to service as many as you have, to gather the money for your apartment. Your upkeep will also be as a result of the generous donations of your Keepers. All your Keepers would know that they are all part-time Chairmen on your Board, so in their minds they know you are asking the others for whatever it is you’re asking them for, and so will give you accordingly. You will be constantly tired, stressed-out and weak…I mean meeting the sexual demands of more than two men at the same time would cripple even Wonder Woman, so I would advise you enroll in a Gym, to boost your prowess.  You also always have to be on the look-out for new Keepers, because you have no assurance that any of the current ones will pick up your phone call the next day.

Available Ass-et: In this case, you no dey look face!! You are available to anyone that can afford your Baseline. So you’ll have to set a Base-line for yourself (a price that you can’t go beneath), and so any prospective Keeper that you give the initial checking-out, and doesn’t look like he can meet your Base-line, you don’t even bother yourself with. Depending on how tight your game is, you might end up living even better than the Above-the-Liners, but I’ll advise that you maximize your ‘Glory days’ as much as you can, because nature sure has a way of running its course. Over time, sex with you will be less exciting, due to the amount of partners you have. Your Keepers would spot this right away, and for them, what would be the point? The wear and tear will also begin to show on your face, skin and life’s perspectives eventually, and sooner than later, you definitely would have to consider Plastic Surgery or something. So gather all you can during your ‘Glory Days’ so that you can use the funds generated to create for yourself a new Era. That way you’d NEVER run out of business.

Wow!! This has been a long one! I hope I’ve been very helpful in shedding light on the different opportunities available to you in your quest to be a DIVA. Everything I have shared is rooted in true-life experiences of people who were once as naïve as you are, but have now given their quota in one or all of the different levels we have talked about.

I wish you all the best in your Career…I hope to hear your story soon.

The New Collection “Pure Light” from MANGO – Now in Nigeria