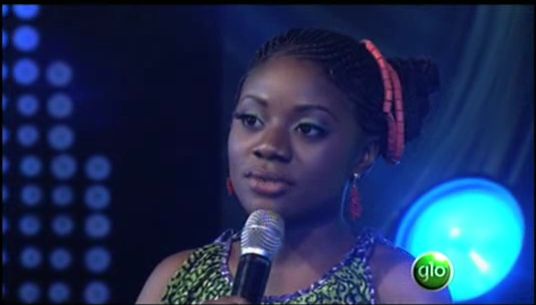 This week, the theme was “Fela“, all the contestants were set to perform 2 songs from the Afrobeat legend’s catalogue of hits.

The special guest commentator of the week was Sound Sultan and he was there to watch as the Top 4 contestants performed songs by Fela. Check out the video of the elimination and all the performances below. Fela’s songs are really difficult to perform because there was such a high benchmark set by the legend! However, the contestants did quite well. Also, I wonder how Fela would feel about his music being performed on such a mainstream show especially with the message of many of the songs being somewhat anti-capitalist. We reckon he’ll appreciate it and be tickled by the irony. Internationally, many musical legends such as the Beatles and Elton John have their songs performed on reality music shows such as X Factor and American Idols. What do you think?

Make sure you vote for your favourites!

Top 4 – 2nd Performance: Peace – ‘No wahala’ for Peace as she takes on ‘Suwegbe’

Top 4 – 2nd Performance: Casey – After singing one for the gentleman, this is for the ladies!

Tune in next Sunday to see how your favourite fared, only on M-Net.

Each week, lucky voters (SMS Voters only) stand the chance to win a Blackberry Bold, an iPod Touch and 10 Glo subscribers will have their accounts recharged with 1000 Naira of airtime. Plus one lucky viewer that votes via SMS also stands the chance to win a Toyota Corolla from Glo at the end of the series, so vote now to get in line to win some fabulous prizes!

There are four ways you can vote:

Via the Website
You can vote once per hour per registered email address. Voting on the website is free. Go to www.mnetafrica.com/naijasings

Via the Wapsite
Type www.mnetafrica.com/naijasings into your mobile browser and start voting. You can vote once per hour and voting via Wap is free.

In Nigeria: Text just THE NUMBER that corresponds to your favourite contestant to 33364.
NB: Mobile voting is exclusive to Glo subscribers and SMSes cost N50.

Outside Nigeria and Benin: Text just THE NUMBER that corresponds to your favourite contestant to +2783142100400. This is open to all networks – international SMS rates apply.

Via MXit
Open your mobile phone’s browser and type in m.mxit.com to download MXit for free. Then locate MXit on your phone under the applications or games section and register. Once in MXit, go to Tradepost>Entertainment>MNET and then add the Naija Sings Voting contact.