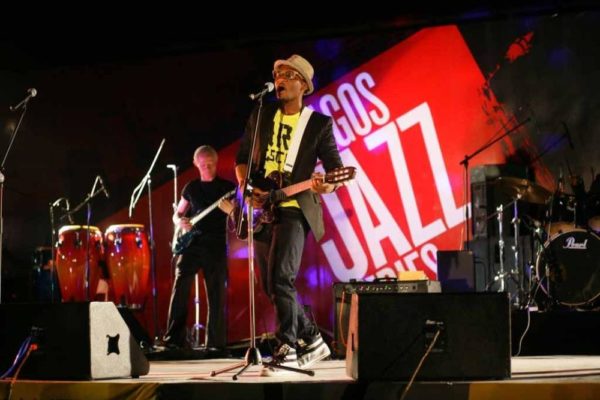 The maiden edition of the Lagos Jazz Series (LJS) ended on a glorious note on Sunday night with a headline performance by South African guitarist Jimmy Dludlu and an endcap by young and upcoming pop-soul-jazz singer, Bez. It marked the end of three days, Friday November 5th to Sunday November 7th, 2010 of relaxed jazz performances across ever more beautiful outdoor venues in a city better known for its urban hustle and bustle.

The idea, according to founder Oti Bazunu, was to treat Lagosians and visitors from all over to a series of exciting live and outdoor Jazz performances – in the garden, at the park, and on the Lagos waterfront. Audiences, including government dignitaries, corporate executives and professionals, media and culture personalities; returned day after day for more of the series, mixing an enjoyment of the music and venues with an opportunity to talk business in a relaxed atmosphere.

The series opened on Friday November 5, at The Sofitel Morehouse in Ikoyi, Lagos, with Karen Patterson, Chinaza and Morrie Louden taking turns to thrill guests – most of whom defied the Friday evening rain to be at the venue. Top bank executives, publishers, editors and artistes spent the evening savouring performances by American cellist, Karen Patterson; German-Nigerian singer, Chinaza and American (upright) bassist Morrie Louden. 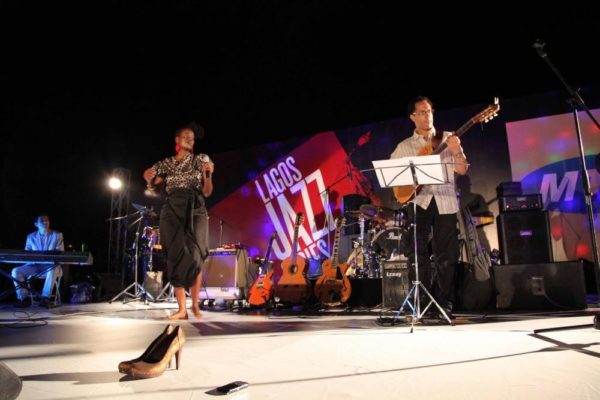 The Saturday night show at Federal Palace took place in the hotels garden, a remarkably picturesque stage set against the Lagos lagoon and skyline. Rwandan-Ugandan singer Somi set the night off, performing original jazz compositions infused with soul and African melodies backed by a multi-racial quartet of musicians. Indeed the diversity of musicians for the entire series was impressive with most bands drawing members from across the world. At least a dozen countries including Spain, Mozambique, South Africa, Israel, Italy, Greece and Rwanda were represented.

Nigerian saxophonist Mike Aremu came next, weaving through the audience and serenading guests on his way to the stage, and in the process receiving a welcome worthy of a hometown hero. One of Nigeria’s most popular jazz musicians, he and his 13-man band played a series of hits and covers of popular music. Post-perfromance, he declared his pleasure at the event, ‘We’ve performed all over the world. Our artistes keep looking for big stages to display their talents at festivals in Europe, America and even South Africa. I’m so glad that events like the Lagos Jazz Series are happening here with staging and settings as incredible as you’d find anywhere in the world. I’m really looking forward to this happening again next year…’ 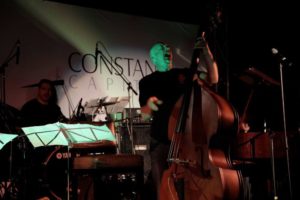 Also pleased to be in Nigeria was Morrie Louden, for whom this was his first trip to Lagos. Applauding his love of “Lagos, the scenery, the people, the vibe”, Morrie took the stage to stun the audience with his technical virtuosity, melodic improvisation, and original compositions. The set included sensitive ballads and bossa novas, and even an impromptu rap by his saxophonist that grabbed the audience’s attention as the second day of the series ended.

The final day of the Lagos Jazz Series featured not one but two performances, starting early in the day at the German Consulate where the cream of the diplomatic community (including Nigerian minister, Odein Ajumogobia) and a host of business leaders came together for a jazz breakfast. Karen Patterson, Chinaza and Bez performed in the serene consulate gardens, where the presence of so many distinguished guests from the corporate world gave the event a solid endorsement from the establishment.

The final event took place at Muri Okunola Park. The massive stage bore the logos of the Lagos Jazz Series logo and sponsoring brand, MTN Enterprise. It opened up to an imposing view of the Eko Courts and Polo buildings and all of Victoria Island behind, an impressive urban backdrop for the large green lawn of the park. Sponsors MTN cannily set up a tent to cater for their VIP guests, placing it beyond a booth displaying their enterprise and business products. The right aisle of the park was lined with vendors selling food, beverages and treats of all kind. Guests received mats as they came in and sat sipping Noble Hill wine and enjoying barbeque and canapés. Couples, families, friends and colleagues created their own little corners in the garden, as the evening took off and the organisers transformed the park into a haven for Jazz lovers. In a city so often remarked upon as a security risk, the Lagos Jazz Series ran all Sunday night into the early hours of Monday morning, without any security incidents. In fact the whole event felt remarkably secure and serene. Founder of the series, Oti Bazunu said, ‘We hope the success of Lagos Jazz Series in executing so many events over so many venues with international artists and distinguished guests in attendance paints a different picture on security in Africa’s most populous city.’

The final evening of music was more populist than the previous evenings, fitting the park with its relaxed atmosphere and reduced prices. Somi once again opened the evening’s performances before rushing her band off to the airport to catch a plane. She was followed by the very eccentric and unexpected act, Salvador Sango. Led by Greek singer Sotiris, Salvador Sango plays music that could be described as afrobeat meets disco meets rock star. The 12-piece jazz band Ayetoro was far less unconventional although still far from ordinary. Ayetoro have performed all over the world spending years in London and Ghana, only recently returning to Lagos. The set they performed was full of mellow jazz songs with a good swing, easy music to groove to. Singer Sista Soul brought a nice bit of neo-soul to the set.

Which brought the evening to South African Superstar Jimmy Dludlu. Jimmy has been in Lagos before, notably as part of last year’s Muson Jazz Festival. At the Lagos Jazz Series, with the huge Muri Okunola stage to roam, he really got a chance to groove. The guitarist and his band really proved their showmanship, first getting the relaxed crowd rocking along where they sat, then exhorting them to get up and move. It was a pleasure to watch the entire crowd rise from their mats to dance along with him and a revelation to find them still dancing for the rest of his set. From couples twirling about to little kids excitedly following Jimmy’s step on stage, it was a hearty retort to anyone who thinks of jazz as a stiff or lifeless music. The 500 or so guests cheered heartily as he left stage and sat in happy exhaustion to await the final act of the night, young superstar in the making, Bez.

Coming after Jimmy’s masterful set would be a daunting task for many a Nigerian performer but Bez has clearly learnt a thing or two about performing in the year or so since he first appeared to the public on the Hennessy Artistry stage. His confidence as a performer has grown boundlessly, alongside his catalogue of masterfully arranged songs and he took the stage like a professional. Starting with a few new songs, he kept the energy high before delivering a rendition of Fela’s “Water No Get Enemy” that once again got the crowd on their feet, singing along with him. He followed that with his latest single, “Super Sun,” a crowd pleasing pop song with lyrics that stick in your head the first time you hear them. Cue another sing along. There could be no doubts about how big his star shines by the time he closed the night out with his first single – Zuchiya Daya. 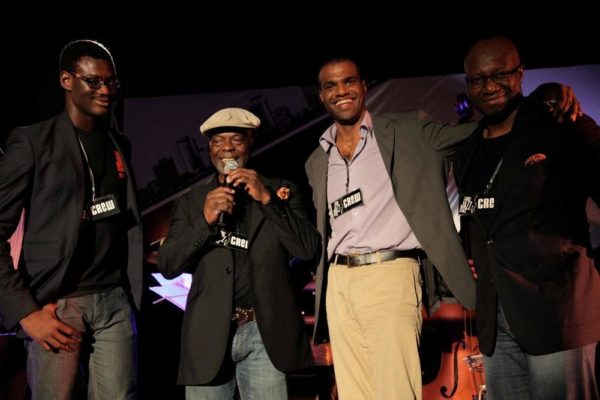 The organizers of the Lagos Jazz Series came onstage afterwards; Hakeem Jimo of Lion-Sun Consulting, Babatunde Jeje of Street Energy Entertainment, Hameed Abubakar of Black Box Consulting, Tomiwa Aladekomo of QUIRK (who handled all production for the series) and Oti Bazunu, founder of the Lagos Jazz Series. They took a well-deserved bow and promised to return next year with an even better show.