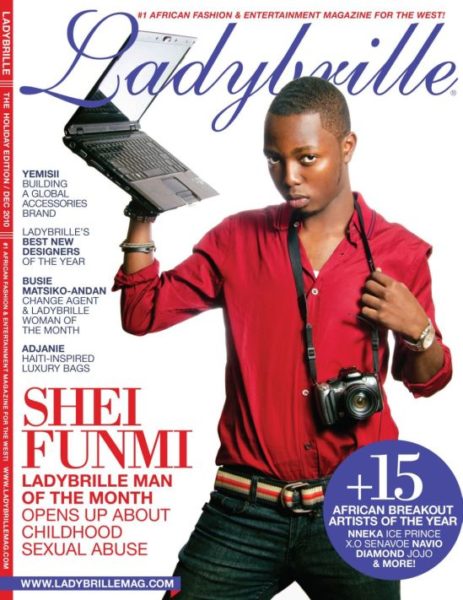 Celebrity Blogger Shei Funmi of sheifunmi.com makes the cover of Ladybrille Magazine’s December Holiday Edition as its ‘Man of the Month.’ The edition celebrates the spirit of the Holiday and those who give back to their local and global communities.

In the exclusive interview to be published on Wednesday December 8th, 2010 on the Magazine’s website (Ladybrillemag.com), the nineteen year old rising media personality opens up, for the first time, about being raped by his male cousin when he was only 10years old.

“Being raped by my cousin at ten had a devastating effect on me,” said Funmi. “I have struggled to overcome the emotional pain and kept the devastating experience to myself all these years. But after a friend of mine who went through a similar experience recently committed suicide, I knew I could no longer keep it to myself. I hope to encourage others who have gone through this to realize they are not alone and to seek help,” added Funmi. “The Ladybrille platform because of its credibility and respect for the people it features felt like the safest place to tell my story.”

It is really commendable that Shei Funmi is opening up about this tragic event. Sexual Abuse especially same sex sexual abuse is a taboo discussion in Nigeria and very rarely discussed openly. We hope that he has received counselling and pray that the mental and emotional scars are healed.

The Ladybrille ‘Man of the Month’ is a monthly feature on the online magazine which celebrates outstanding men, locally and internationally, for their brilliant contributions to society. Ladybrille magazine was founded in 2007 to de-stigmatize the negative images of Africans by exposing its youthful, urban and explosive fashion and entertainment industries to the Western masses.

The magazine also has a ‘Woman of the Month’ feature with a parallel mission. Making the cut for this month’s ‘Woman of the Month’ is Busie Matsiko-Andan – a change agent, co-founder of the popular Fashionindie.com website and an executive at The Global Syndicate non-profit organization.

“It’s an honor, humbling, and very exhilarating to closeout the year as Ladybrille Woman of the month!” said Matsiko-Andan. “I’m thrilled and buoyant that the struggle continues for greater horizons!”