Omoni Oboli, Mercy Johnson & Ini Edo bask in the limelight at the 2010 Best of Nollywood Awards

Nollywood brought the glamour and pizazz to Ijebu Ode in Ogun State on the 12th of December 2010. The Best of Nollywood Awards held the second edition of its annual Nigerian movie industry recognition event.
This year, Unilever were on board as the headline sponsors, this support gave BON organizer Seun Oloketuyi and his team, a larger platform and opportunity to make an impact with this year’s event.

In addition to the awards, the organizers planned what they tagged as “the longest red carpet in the world”. The goal was to beat the existing Guinness World Record for longest red carpet. BN is yet to receive confirmation from the Guinness World Records organization as to whether this feat was achieved. The event was hosted by Chioma Chukwuka-Akpotha and Deji Fayope. Ini Edo, Uche Jombo, Beverly Naya, Kunle Afolayan, Ronke Ojo and several other stars won BON awards at the event.

Omoni Oboli was the big winner of the night as she won the SUNLIGHT Partnership Award for Clean and Fresh Actress of the Year 2010. She received $10,000, a washing machine and a trip to Dubai for winning this award. AY Makun won the LIPTON Comedian of the Year 2010 award, he received a N1,000,000 prize along with his plaque.

There was controversy surrounding the Actress in a Leading Role (English) award which Omoni Oboli also won. Online voters noted that actress Genevieve Nnaji who was also nominated in this category led the online polls, therefore should have won the award. Organizers have rebutted these claims by outlining that online votes are not the sole determinant for choosing the winners. SMS votes and judging panel recommendations are also factored in when selecting the winner. Both sides of the debate have valid points, this could have been avoided by clearly outlining the voting and selection process prior to the  event.

Overall, it was an interesting night. Nice to see more showbiz events being held in states beyond Lagos and the FCT – Abuja. 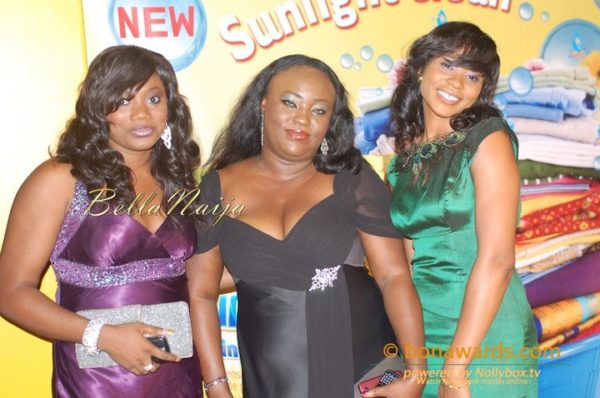 Uche Jombo shows off her prize

AY Makun with his award

Omoni Oboli on stage with her husband, Nnamdi