Has the Church Failed Us? 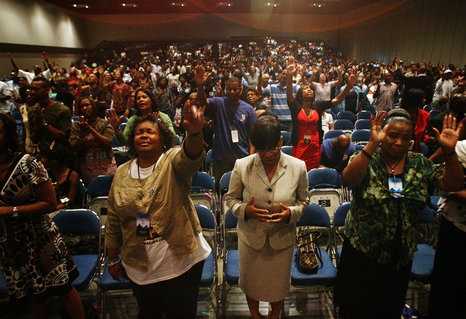 In every mile radius in the City of Lagos, a church exists. For most of these churches, there are plans to sprawl into more concaves in the Lagos metropolis and even bigger plans for a megachurch. Most event spaces can testify to the fact that a lot of their revenue is generated from churches that rent their space as much as weddings and corporate events. There are certain popular spots which seem impossible to book for a function on Sundays because they have already been reserved and paid for, a year in advance. So you know that these spaces don’t come cheap.

With this at the back of one’s mind, it can be safe to say that, as a city, we probably have more churches than local constituencies;plus, with an ever-increasing congregation seemingly becoming jaded and apolitical, we are seeing the church at the height of its influential status. This makes it an institution even more powerful than the political framework governing the state. This is of course in terms of influence, not finance or decision making abilities.

Though the church is typically known as the place that disseminates the teachings of the Bible, its followers form a community seeking both personal and spiritual fulfillment. As we watch our leaders throw jabs at each other in the dailies and on the news while infrastructure debilitates in front of our eyes – healthcare, transport, education, power and everything else – the people turn to the church for even much more. In the last few months of researching different subjects for our radio programme, mostly in areas relating to health care and education, I had uncovered new discoveries that made me ask the question a little too many times “what was your church doing?”

The examples are countless. Fore instance, I recently spoke with one of the doctors from the Sebeccly Cancer Care and Support Centre. I was informed that quite a lot of the breast cancer patients they meet have advanced to the point where their nipples have fallen off and their breasts start to breed maggots. It’s left to them to look for any means necessary to raise funds for emergency mastectomies and chemotherapy treatment as they are a centre that provides after-care support for breast cancer patients, but sadly can’t turn people away that need their immediate help.

Or the singer whose sight was getting blurry and was told he had glaucoma and a few years later, he went to bed and woke up blind. Or the girl with epilepsy who was tied to a metal bed as it was thought that her seizures were a kind of demonic possession.

Or the girl who was being sexually abused by her uncle and couldn’t do much because he gave her the ultimatum of staying with him and getting a City education or going back to farm in the village. These stories only represent a miniscule amount of the people I have interviewed, but the common thread amongst them was that they spent extensive periods in church, praying, fasting and partaking in exorcisms and spiritual conventions, awaiting their break through moment. They all spoke to their church leaders who spoke to them about prayers and patience.

As sad as these stories were, I had also come in contact with faith-based groups with outreach programmes, educational scholarship programmes, youth rehabilitation and sex workers reformation schemes. I remember a young man we interviewed who had spent six years awaiting trial for armed robbery and, to be honest, he was just one amongst many. From Alagbon to Kirikiri, sixty to seventy percent of the inmates were awaiting trial and some had not even seen a court room. The young man was released on amnesty with the help of a Christian organisation who had been involved in prison ministration for decades. They helped to rehabilitate him, equipping him with skills to integrate back into society.

I was also privileged to watch a documentary created by another faith-based group. The film documented the underbelly of drug addiction here in Lagos and its devastating effects on the lives of its victims and their families. It showed heroine addicts shooting up and smoking tar under the bridge on Tin Can Island in Apapa and pregnant teenage girls in Akala, Mushin. The Church has created a refuge for most of the girls to start a new life away from their pimps as well as a treatment facility for addiction problems. They are constantly creating awareness on the new craze amongst young people using pharmaceutical drugs like Rhopynol (sometimes known as Ruffies or Roche) and cough syrup with heavy doses of Codeine to get high.

It is difficult to have a conversation with anyone without being interrupted by a thought that begins with the phrase “My pastor says…”. This just goes to show you how much influence the church has in our lives and existence. This influence is power and this power is a responsibility. It is a responsibility to not only teach the Word, but a responsibility to educate, empower, impact, love, care, give and most importantly change things. So, as we spend days in church re-enacting the “ Ayamatanga” series delivered from the power of darkness while the choir mistress’s stomach continues to swell from a growing tumour or the one sitting next to you smiles with a cloudy eye, and another fellow Church goer in the row in front of you spends a year loitering because they couldn’t afford to buy their JAMB form, you might want to reflect on what the vision of your church was in the first place and perhaps re-assess the execution of that vision and then ponder as to whether or not that vision reaches out to the congregants. I guess what I am saying in a nut shell is simple, Churches need to be visible, not just in erecting large dome-like buildings but also in spiritual, physical and material growth of it’s congregants and the community at large.

We don’t need more canopies, cordless microphones, megaphones and another architectural edifice in an already over-crowded metropolis. We need responsible people using the skills and gifts that God has put inside of them. With all said, the church is a community, and though communities have leaders, we as individuals make that community. So maybe the new question we should ask is: Have ‘we’ failed ‘us’?

The Igwe Twins: Bringing their Mobile Kitchen Dream to Reality through Service and Speedy Delivery