Fans join 2Face, Samson Siasia & Others for a Once in a Lifetime Experience at Guinness The Match 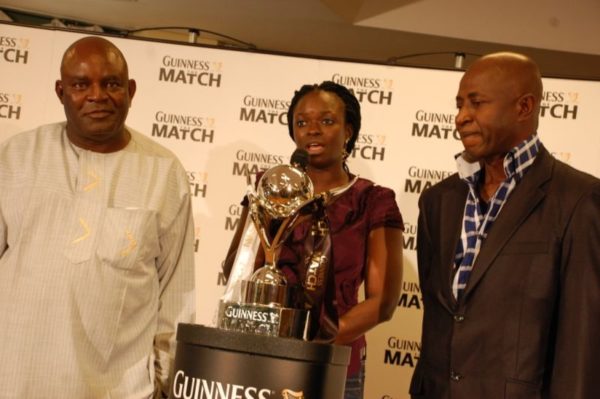 The winners of the Guinness The Match “once in a lifetime” competition have been announced and these five football fans will be travelling to Abuja next week to play their part at this match of a lifetime as the Super Eagles take on Argentina.

Guinness believes that it is the part played by the nation’s football fans that will make the real difference at Guinness The Match, and through a series of activities, has challenged and empowered Nigerians to be more than fans and play their part, make their voices heard, their views count and show what they are made of.

Joining the team will be Emeka Abgbuawa from Lagos who has won the opportunity to sit alongside the Brilla FM commentary team on match day and fill the nation in on every twist, turn, pass, foul and goal with his live commentary throughout the match. Sunday Gbadamosi from Lagos will be at the side of the pitch armed with his camera to capture all the action as it unfolds in his role as Official Match Day photographer with Complete Sports.
Thousands of fans of football across Nigerians stepped up for these once in a lifetime opportunities, but it was expert panels at the media partners and fans on GUINNESS VIP™ who chose the winners.

Tochukwu Mogekwu, says, “As soon as I was declared the winner and I felt my heart literally jumped into my mouth, it was an overwhelming moment for me and I can never forget this day, Sports, especially football has always been my passion; I have always followed it closely. I hereby give my sincere gratitude to Guinness and Super Sports for giving me this opportunity to be an Assistant Coach for the Super Eagles, this is one opportunity many people can only dream about and Guinness and Guinness The Match have made it happen for me, I will not let you down.”

Pitch side TV Analyst, Oliver Anozie, comments “My entry into Guinness The Match TV analyst competition was borne out of my ardent interest in the area of sports analyses, so I was in the seventh heaven when I received the news that my entry had made the final cut. My joy knew no bounds when I was eventually allowed into the SuperSports studio, this was a dream come true. Thanks to Guinness for this unique opportunity leading to my being selected after the whole exercise. I pray you keep the good work up and continue to help others out there like me to realize their dreams’.”

Emeka Egbuawa, from Imo State, who has won the opportunity to be the Brilla FM Radio Commentator said “After being declared winner I felt on top of the world if I may say that, in fact it’s an understatement. I feel like flying, it’s great!”

The Official Match Day Photographer, Ondo State based, Sunday Gbadamosi, said “I feel so privileged, it is awesome. I feel so great, I am happy because, I have the opportunity to demonstrate that I can do something worthwhile for football.”

Comments Omotola Adebayo, who will be performing the National Anthem on match day, “I’m so excited that I’m going to be playing a part at Guinness The Match. I have been singing since I was eight and the very first song I learnt as a child was my national anthem, which makes this performance a dream come true for me. I dream music, eat music, and play music and I have been practicing every day in preparation for the big performance.”

In other Guinness The Match news, The Conquest, the magnificent and specially commissioned trophy for Guinness The Match, was unveiled by Christian Chukwu and Segun Odegbami; two of the oldest and most respected former captains of the Super Eagles senior national team who have both left an indelible mark on the pages of the country’s football history. Proudly Nigerian, the trophy is designed and inspired by Nigerians and comprises three main elements – the football, the mighty eagle and the steps of glory; each bearing a meaning that runs deep and true to the beautiful game of football.

The football stands tall at the centre of two eagle wings, depicting the match between two forces to be reckoned with in football – Argentina and Nigeria.

The eagle soars with its wings spread wide as a symbol of strength and pride. As a major part of the history of Nigeria, the eagle stands in Nigeria’s Coat of Arms and on The Conquest, its wings recreate the shape of the two major rivers that flow through Nigeria – River Niger and River Benue.

The Steps of Glory on The Conquest represent the path to greatness as well as the glory and satisfaction that comes from reaching out, progressing from one level to the next until victory is achieved. That moment when the entire world joins the celebration and acknowledges that as a team you went, saw and truly conquered.

Guinness The Match will be the match of a lifetime that no true football fan should miss as Guinness provides the opportunity for Nigeria’s Super Eagles to compete with Argentina – one of the world’s greatest football nations.
As Guinness The Match draws closer, there is still time for you to play a part and send your message of support to the Super Eagles for 1st June. This can be done by becoming a member of GUINNESS VIP™. To become a member, register at m.guinnessvip.com on your phone or computer or text yes and your date of birth to 1759. SMS cost N10. Or you can go to facebook.com/guinnessvip.