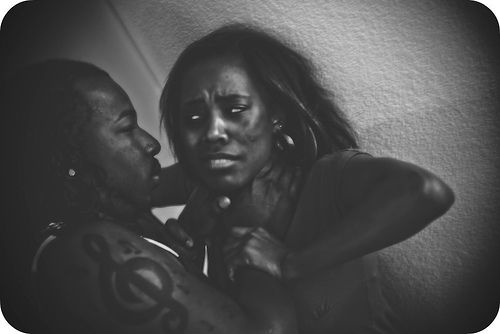 The news, a few weeks ago, of a serving Nigerian ambassador’s alleged physical assault on his wife inspired this piece. Now, my intention is not to discuss that particular case as I feel it is beyond my scope to opine on the matter but rather to discuss the issue of domestic violence among young dating couples. Yes now! We all know of or have heard of relationships where the man chooses to turn his girlfriend or fiancée into a punching bag of some sorts or at the very least resorted to one or two blows in order to resolve a heated argument or quarrel. In case you haven’t let me illustrate with a few examples.

In my second year in university, as a “bigger” boy I opted to stay off campus and I got a small decent flat in a nice building, in one of the communities around the school. It was a small, but very quiet student community. One Saturday morning, my flatmates and I heard shouts and screams from one of the rooms on the top floor. Not quite accustomed to that kind of thing we came out and began to move towards the stairwell. We heard a door slam shut and then some girl screaming “Open this door!” Long story short, the one at the door was the roommate of a very fine third year student who was at that moment being pummelled by her long time boyfriend. Roommate was bounced because she tried to interfere in the beating process. And what was girlfriend’s wrong doing? She went out partying the previous night without consulting  her boyfriend and was reportedly rude and insulting when questioned about it. Some men convinced him to open the door, which he did only after he must have sated himself. He stormed out of the building. Babe’s beautiful face was badly bruised. I later learned that this was a recurring feature in their relationship but all I could think about was why a beautiful girl like that would allow her boyfriend to beat her up and why she would continue to remain in such a relationship! I could imagine the number of correct guys that would have been toasting her only for her to end up with a woman basher.

Even in the larger society we all must have heard of one couple where the girl shows up with the occasional shades-covered black eye or sprained wrist, citing door posts and slips down flights of stairs. And the irony sometimes is that these were girls who were first to swear that no man would ever touch them in violence! The first time is always a mistake and easily forgiven; the second, excused away as a result of drunkenness; the third marked down as deserved due to her rudeness; and on and on it goes. The relationship quickly becomes an abusive one. Our customary and magistrate courts are full with such stories of spousal abuse: “My husband beats me because I refuse him sex!” “My wife poured hot soup on me because I did not give her feeding allowance!” Now this issue is not restricted to Nigerians or Africans alone but is a common feature in various countries.

As a result I tried to figure out why a man would lay his hands on a girl he claimed to love. Another man’s child? What was it? It has been posited that guys are driven to this by their uncontrollable anger and rage. Or could it be issues of low self esteem on the man’s part? It has been suggested that the women even ask for it by their continuous goading of the man. Women have been known to be experts at throwing piercing insults and jibes at men and since men cannot match them insult for insult, they resort to using their fists to respond to such taunts. I have even heard that women say that it’s only a man that really loves them that would hit them! It is regarded as a show of love when their man is passionate enough about them to face them and fight during heated quarrels and arguments. By the way, they also add that the make-up sex is out of this world!

Another suggestion is that these men probably grew up in households where their fathers beat their mothers and as such have come to see it as not so strange. Women too who have grown up in such households may see fighting with their spouses as a demand for respect and a show of strength. Personally, I see it as a show of weakness. Yes, anger can drive us to such points but love should overrule such behaviour. Women are the weaker sex physically and as such should be treated so. Self control is key and the man being the stronger person should simply walk away from a quarrelling woman. But is it that easy to walk away from a woman who “means you?”

The flip side is the case where women assault their boyfriends. Now I have not heard of any case where a woman beat up her boyfriend (this is understandable as the guys would never tell!) but I have heard of wives beating their husbands! Even if the assault is not physical it can be verbal and emotional. Stories of girlfriends/wives assaulting perceived rivals, and (domestic) staff of their boyfriends/ husbands are pretty common. Yet this should not warrant a physical response from the man. Violence should not be an option because violence only begets more violence. These days women now try to return the beatings by attacking men with dangerous weapons. Bottles have been thrown, and manhoods have been severed in anger. The battle of the sexes need not be a physical one.

It’s difficult for someone who hasn’t been in an abusive relationship to understand the psychological process of those who choose to remain in such abusive situations. I think sometimes it’s harder for those in such relationships to see past their situation. Perhaps, the family and friends of such victims have a higher responsibility to help out. We need to stop turning a blind eye to abuse, our silence only helps to entrench these activities further. We need to become a society which speaks up for those who, for whatever reason, cannot. So instead of the hushed judgemental tones of ‘why can’t she just leave him’, ‘if it was me I would have left ages ago’, why don’t we speak out for them, confront the abuser, challenge them, be a source of comfort to the abused and a voice who speaks for those who seemingly cant. Maybe our own voices can then become a source of strength which empowers them to do that which we so desperately desire them to do.