When they began their relationship, the odds were stacked against them. A 22 Year Old Law Graduate and reigning beauty queen, an ex-soldier and Biafran leader in his mid 50s.
No one thought it would last.
I remember years ago, I would ask my mum why Bianca would have married and stay married to “an old man”. She laughed and told me that they loved each other. She told me about the epic poems and love letters Ojukwu would pen for his wife.
In his autobiography “Because I am Involved”, published in 1989 (shortly after they met), Emeka Odumegwu Ojukwu describes Bianca “I am wont to comment more on her phenomenon than her person for I feel more at ease with this. If after looking at her photographs in the newspaper or viewing the repeat broadcasts of her Intercontinental triumph, if after seeing this I exclaim with all men that she is beautiful, it would be like standing in front of the Empire State Building in New York and exclaiming that the building is high” 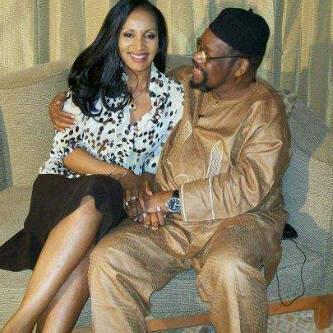 How do I sum up 23 years in one page? I don’t know. How do I describe you? I cannot. Not in any depth. Not for anybody else – you were my husband, my brother, my friend, my child. I was your queen, and it was an honour to have served you.

You were the lion of my history books, the leader of my nation when we faced extinction, the larger-than-life history come to my life – living, breathing legend. But unlike the history books, you defied all preconceptions. You made me cry from laughter with your jokes, many irreverent. You awed me with your wisdom. You melted my heart with your kindness. Your impeccable manners made Prince Charming a living reality. Your fearlessness made you the man I dreamt of all my life and your total lack of seeking public approval before speaking your mind separated you from mere mortals.

Every year that I spent with you was an adventure – no two days were the same. With you, I was finally able to soar on wings wider than the ocean. With you I was blessed with the best children God in heaven had to give. With you, I learnt to face the world without fear and learnt daily the things that matter most. Your disdain for money was novel – sometimes funny, other times quite alarming.

It mattered not a whit to you. Your total dedication to your people – Ndi-Igbo – was so absolute that really, very little else mattered. You never craved anybody’s praise as long as you believed that you were doing right and even in the face of utmost danger, you never relented from speaking truth to power – to you, what after all, was power? It was not that conferred by the gun, nor that stolen from the ballot box. No. You understood that power transcended all that. Power is the freedom to be true to yourself and to God, no matter the cost.

It is freedom from fear. It is freedom from bondage. It is freedom to seek the wellbeing of your people just because you love them. It is the ability to move a whole nation without a penny as inducement nor a gun to force them. When an entire nation can rise up for one person for no other reason than that they love him and know he is their leader – sans gun, money, official title or any strange paraphernalia – that is power.

To try to contain you in words is futile. You span the breadth of human experience – full of laughter, joy, kindness and sometimes, almost childlike in your ability to find something good in almost everyone and every situation. You could flare up at any injustice and in the next instant, sing military songs to the children. You could analyse a situation with incredible swiftness and accuracy. In any generation, there can only be one like you. You were that one star. You were a child of destiny, born for no other time than the one you found yourself in.

Destined to lead your people at the time total extinction was staring us in the face. There was no one else. You gained nothing from it. You used all the resources you had just to wage a war of survival. You fought to keep us alive when we were being slaughtered like rams for no reason. Today, we find ourselves in the same situation but you are not here. You fought that we might live. The truth is finally coming out and even those who fought you now acknowledge that you had no choice. For your faithfulness, God kept you and brought you home to your people.

You loved Nigeria. You spent so much of your waking moments devising ways through which Nigeria could progress to Tai-Two!!! You were the eternal optimist, always hoping that one day, God will touch His people and give us one Vision and the diligence to work towards the dream. It never came to pass in your lifetime. Instead, the disaster you predicted if we continued on the same path has come home to roost. You always saw so clearly. Your words are indelibly preserved for this generation to read and learn and perhaps heed and turn.

You always said the dry bones will rise again. But you always hoped we would not become the dry bones by our actions. Above all, you feared for your own people, crying out against the relentless oppression that has not ceased since the end of the war and saddened by the acceptance of this position by your own people. In death, you have awakened the spirit that we thought had died. Your people are finally waking up. At home, you were the father any child would dream of having. At no point did our children have to wonder where you were. You were ever at their disposal, playing with them, teaching them of a bygone era, teaching them of the world they live in and giving them the total security of knowing you were always present.

The Ikemba Goes Home
In mercy, God gave me a year to prepare for the inevitable. I could never have survived an instant departure. In mercy, God ensured that your final week on earth was spent only with me and that on your last day, you were back to your old self. I cannot but thank God for the joy of that final day – the jokes, the laughter, the songs. It was a lifetime packed into a few hours, filled with hope that many tomorrows would follow and that we would be home for Christmas. You deceived me. You were so emphatic that we would be going home. I did not know you meant a different home.

The swiftness of your departure remains shocking to me. You left on the day I least expected. But I cannot fight God. He owns your life and mine. I know that God called you home because every other time it seemed you were at death’s door, you fought like the lion that God made you and always prevailed. In my eyes, even death was no match for you. But who can say ‘no’ to the Almighty God? You walked away with Him, going away with such peace that I can only bow to God’s sovereignty. Your people have remembered. The warrior of our land has gone. The flags are lowered in your honour. Our hearts are laden with grief.

But I will trust that the living God who gave you to me will look after me and our children. Through my sadness, the memories will always shine bright and beautiful.

**
Bianca & Ojukwu – A Love Story in Life…and in Death

Related Topics:Bianca Ojukwu
Up Next

BN Saturday Celebrity Interview: “The Man Behind the Camera” Ace Filmmaker, Clarence Peters – The Music, The Videos, The Family & More!