With the global financial meltdown and many economies around the world struggling, it’s clear that now is the time to be moneywise.

Whenever Nigerian celebrities, socialites or stylistas show up at events in clothing by high street brands or retailers that are considered “cheap”, the venom is instant -“OMG is she wearing Primark? – cringe!” Let’s not talk about when people “re-rock”, in some cases, BN has featured photos from different events which took place on the same day, therefore celebs who attended both events technically wore the same outfit twice, you can only imagine the comments….

BN takes a look at recent celeb “re-rockers” and in our books, it’s definitely ok to re-rock!

*****
Check out our celeb (and royal) re-rockers for inspiration!
*****
Even before her highly globally viewed wedding to Prince William on Saturday 29th April 2011 at Westminster Abbey, Kate Middleton has been spotted wearing outfits more than twice, even better than before. Just recently, Kate was seen in these stunning pink £1200 Emilia Wickstead dress on Friday 18th May 2012 during a reception in the Waterloo Chamber in Windsor, England. Just 11 days later, Kate wore the outfit once again at the Buckingham Palace Garden party, this time she gave the dress a more glam look by accessorizing with a pink Jane Corbett hat, nude LK Bennett Sledge heels and a glittering clutch bag. 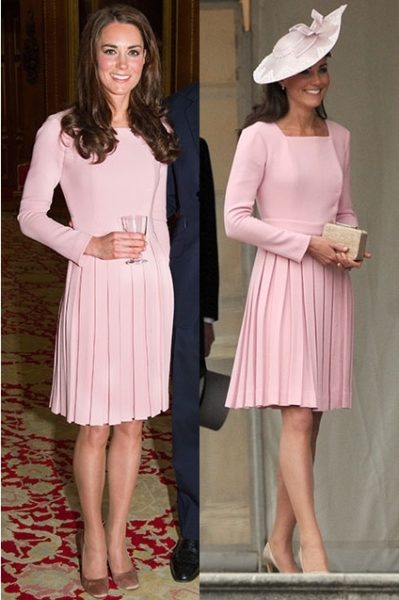 Well if she can wear an outfit more than once, then anyone can. She is the editor-in-chief of the almighty American Vogue and month after month through the globally accepted glossy magazine, she dictates what she thinks women around the world should wear. We are talking about no other than, 62 year old fashion icon –  Anna Wintour, who is definitely a re-rock fan.

Anna was first spotted in this Balenciaga frock at the screening of The Whistleblower at the Tribeca Grand Hotel on Wednesday 27th July 2011 in New York City with her signature glasses and bob hair do. Then on Thursday 8th September 2011, Anna wore the same frock  at the Dolce & Gabbana celebration during Fashion’s Night Out in New York City. When we all thought we have seen the last of Anna in the dress, she again wore the same dress, this time with a different colour of the lower part of the dress, to a Vogue party on Thursday 22nd September 2011 in Milan, Italy. Yet again, Anna wore the dress to the Balenciaga ready-to-wear show during Paris Fashion Week on Thursday 29th September 2011 in Paris.

Another re-rock fan is the First Lady of the United States of America – Michelle Obama. She has been seen in this Tracy Feith dress at least twice. Once for the National Prayer Service in January 2009 and another time she hosted the Farm-To-Table Lunch for spouses of World Leaders in September 2010.

Who would think, the highest paid American reality star Kim Kardashian loves to don her outfits more than once? On three different occasions, Kim was seen in this Kardashian Kollection “Myne” dress, which according to her, is her favorite travel dress. At the Philadelphia International Airport on Friday 27th July 2012, Kim was seen with her boyfriend Kanye West in the dress, looking simple with a gold belt, black birkin bag and sandals. Just before then, Kim gave the dress a more glamorous look at a photo shoot for her fragrance in August 2011 by accessorizing with a leather rope belt, gold necklace and cuffs and Sam Edelman chocolate sandals. Just after her trip with her family to the Dominican Republic, Kim arrived in the US, in the same dress. She wore the dress with a Chanel fringe bag and Guiseppe Zannoti Sandals.

Who said this BN re-rock list is strictly for girls? Dapper celebrity men are also fans of re-rocking, one of which is American rap star Kanye West. He was first spotted in France at the Vivienne Westwood Paris Fashion Week Presentation in this leopard Givenchy bomber jacket on Friday 4th March 2011, less than a year later, Kanye  appeared at the 106 & Park Studio in New York City on Monday 9th April 2012 in the same jacket. 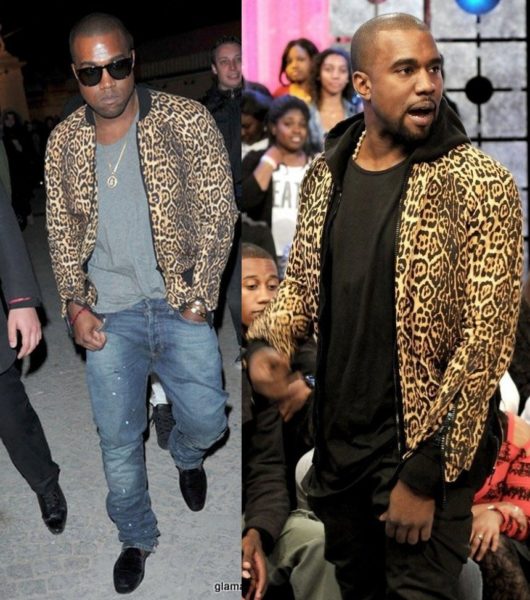 Now let’s come down to our very own country. At the TW Phoenix Gala red carpet, top Nigerian beauty entrepreneur Tara Fela-Durotoye dazzled all in this Tiffany Amber “Lily Wrap” dress, she accessorized her look with black pumps and diamond jewelry. Then on Saturday 28th April 2012, Tara re-rocked the outfit once again for Cakes by Tosan’s Ultimate Luxury Exhibition and Brand Re-Launch at the Civic Centre, Lagos. This time, Tara accessorized her outfit with gold heels, diamond jewelry and sleek up do, which gave her a more youthful look. Which of Tara’s looks, do you like best?

She is one Nigeria’s most loved sonorous singers and also a red carpet style star, who brings glamour at every occasion. On Sunday 25th March 2012, our BN cam spotted superstar singer Waje at the 2012 maiden edition of the LPM Health & Beauty in L’Espace, Lagos in this red Mango jumpsuit, she accessorized her outfit with a blue belt, red bag, drop down colorful earrings and black flats. Showing all that she can re-rock her outfit twice as nice, Waje donned the same jumpsuit on Thursday 12th April 2012 at the exclusive launch of Google + at the GET Arena, Lagos. This time, she accessorized her outfit with orange and white bangles, a black belt and chose to let her hair down. She was also wearing the same earring and bag as the other event. Which of Waje’s looks, do you think, work best for her?