Straight From the Headlines! What Everyone was Talking About This Week

Good evening everyone and thank you for joining us at Bellanaija.com. We are glad to see you here at the Straight From The Headlines slot where we recap major stories that have graced our headlines this week.

We hope you have an interesting time reading through the news summary we’ve brought to you and we wish you success in all your endeavours! 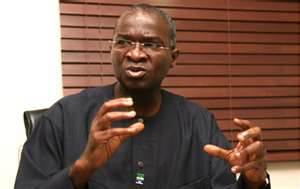 “Obey Traffic Laws or Turn to Farming”
Governor Babatunde Fashola of Lagos  created quite a buzz this week when he told commercial motorcyclists in the state to turn to farming  if the new Traffic Laws prove too stiff for them.
At a meeting with the state leadership of commercial motorcycle operators, popularly called okada riders, on Tuesday, the governor said their members were free to leave the job. Assuring okada riders of government support, Fashola advised that their members who could not cope with the law could “register with the Skill Acquisition Centres across the State or take to farming as a profession.”

A group of Muslims in the city of Jos, Plateau State, on Wednesday evening held a demonstration over an America-produced film that purportedly blasphemed Prophet Muhammad. The protesters, who defied security agents, said they would rather die than to watch their Prophet insulted, and will submit only to the laws of Allah which, to them, are supreme to any other law. The mostly youth and children protesters, who numbered almost 100 carried placards condemning the United States, Israel, Denmark and Holland, accusing them of plotting against Islam and Muslims.
***

Nigeria has been granted a loan by the Peoples Republic of China to the tune of $1.1 billion borrowed for three projects. These are the Abuja light rail project, which is to take $500 million; the galaxy backbone infrastructure project which will cost $100 million  and four airport terminals which require $500 million. The facilities attract concessional terms of 2.5 per cent interest over 20 years with a grace period of seven years.
***

The shocking story of a woman who delivered a horse like creature went viral this week. It was alleged that the woman gave birth to the creature during a prayer session at the World Liberation Ministry located along old Sapele-Benin express road in Edo state. Members of the church reportedly took to their heels when they saw the creature. The horse was however dead by the time Journalists visited the church. Media reports say the woman whose identity was not yet known started screaming during the prayer session and began to bleed from the vagina before she gave birth.
***

The Federal Government has concluded plans to pay women who attend antenatal clinics the sum of N5,000 as part of efforts to battle the menace of high maternal mortality rates. The South-west Zonal Coordinator of the National Primary Healthcare Development Agency. Dr 0ladimeji Olayinka explained that the agency will pay the amount to every pregnant woman that registers for antenatal at the primary health centres in four instalments. She added that beneficiaries will receive N1, 000 twice during antenatal, receive N2, 000 at childbirth and another N1, 000 after childbirth to enable them apply the financial aid at different stages of need including receiving immunization.
***

A pro-democracy and anti-corruption group, Conscience Nigeria (CN), has urged the Federal Government to honour athletes who won medals at the just-concluded Paralympic games in London. The Paralympic team returned home with six gold medals, five silver and two bronze medals. In a press statement signed by its Executive Director, Tosin Adeyanju, the CN called for a befitting reception for the country’s Paralympic team which outshone the country’s Olympic team. Such honours, according to the group, would help to revive the spirit of dedication and commitment among sports men and women, and spur others to do well in future competitions.
***