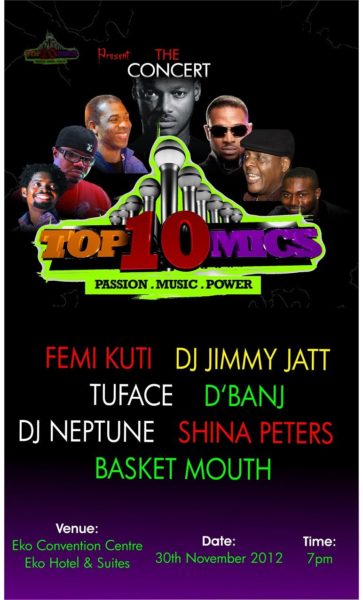 It promises to be a blend of music heavyweights on Friday November 30 2012 at the Eko Hotel and Suites, Victoria Island, Lagos. 2Face, D’banj, Femi Kuti and many others will rock the stage at this year’s edition of the TOP10MICS concert.

The concert will also feature performances from DJs Jimmy Jatt and Neptune, disc jockeys who know their onions in the industry. Ace comedian, Basketmouth will host the concert.

The producer of the concert, Omoh Talabi is gearing up for a great show, here is what he had to say about this year’s concert, “I have produced many concerts but I dare say this year’s edition of TOP10MICS will be extraordinary as it promises to be an unusual concert. Like other concerts where headlining acts perform for a few minutes, TOP10MICS would be different as each artiste would perform for more than 40 minutes with live bands, that is the makeup of big concerts these days“.