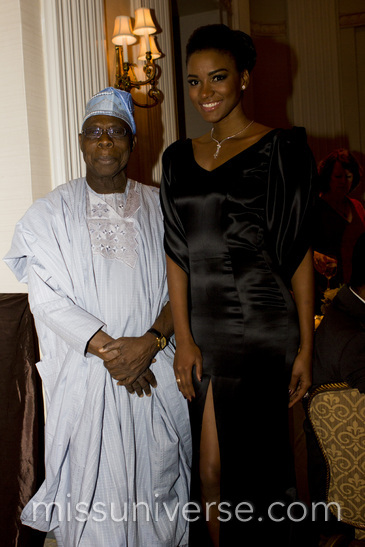 We came across this cute photo of Miss Universe Leila Lopes and Former President of the Federal Republic of Nigeria, Olusegun Obasanjo at the 2012 South-South Awards in New York.

The event which took place weeks ago was launched at the UN Headquarters and took place at the Waldorf Astoria in New York. President Obasanjo was an award recipient at the event which had heads of State and Government, UN Ambassadors, top UN officials and other distinguished guests from the private sector and civil society E-Governance, and ICT infrastructure in attendance.

This year’s awards were given out for excellence in the promotion of e-government infrastructure and sustainable tourism. Attendees enjoyed a full evening of dinner and entertainment, all while championing the cause of international development. The event was hosted by the Prime Minister of Antigua and Barbuda, attracted more than 20 serving and former Heads of State, as well other global leaders.

Other recipients of the awards include Zambian President Michael Chilufya Sata, Prime Minister of Lesotho, Thomas Motsoahae Thabane, and the Chairperson of the African Union Commission, Madam Nkosazana Clarice Dlamini-Zuma, who were present at the event. The Minister of Trade and Investment, Dr. Olusegun Aganga, was also at the event.

***
Obj’s expression in the photo is priceless!