After One Week in Prison, Farouk Lawan & Boniface Enemalo are Granted N10 Million Bail Each 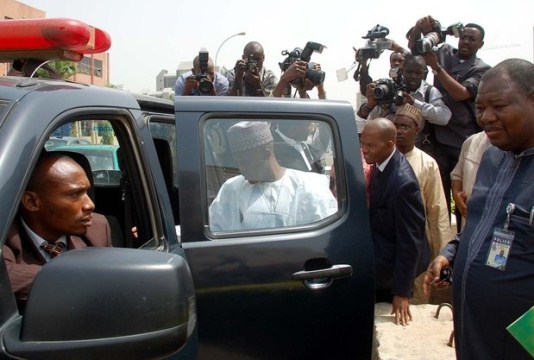 One week after the duo of Farouk Lawan and Boniface Enemalo were arraigned in Court for allegedly obtaining bribe during investigations on the fuel subsidy fraud, they have been granted bail at N10 million each.

Channels TV reports that the presiding judge, Justice Mudashiru Oniyangi of the Federal Capital Territory high court, Abuja granted them bail this morning. He also asked the lawmakers to deposit their travel documents with the court registrar.

Lawan and Enemalo were arraigned by the police on a seven-count charge of corruptly soliciting bribe of $3 million (N450 million) from an independent oil marketer, Femi Otedola. The bribe was allegedly to ensure that Otedola’s company, Zenon Oil and Gas was removed from the list of indicted oil marketers in the infamous fuel subsidy scam.

What is a Promise Ring When Your Babe Wants You to Pop the Big Q? Watch this Short Film – “The Promise”

Meet Dflex, the Nigerian Contortionist who wowed Judges on “America’s Got Talent”

The Baby Episode is Here! Gbemi & Toolz Finally share their Childbirth Journey on the “OffAir Show”

Do You Know What You Want? Here’s the Concluding Part of Pastor Kingsley’s Conversation on “Toke Moments”