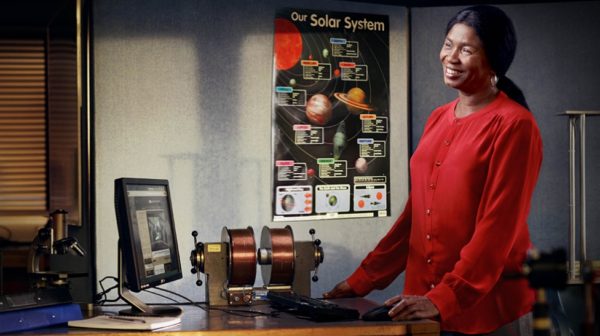 Francisca Okeke, a Professor of Physics at the University of Nigeria, Nsukka has recently received the L’Oreal-UNESCO for Women in Science Award for her contribution to the understanding of “daily variations of the ion currents in the upper atmosphere which may further our understanding of climate change.”

Professor Okeke was the Dean in the faculty of Physical Sciences at UNN from 2008 – 2010. She is a huge inspiration to women in the sciences and we’re really inspired by the work she is doing. In an interview with UNESCO, she was asked “What remains as the biggest challenge faced by women and young girls in science in Nigeria and what can be done to encourage young girls to consider further study in Science?”
She replied: “It’s encouragement. Where and when it is possible, we need to let the guardians and parents know the importance of women participating in science.

I will talk specifically about the village because, though there are some enlightened people there, the situation is worse. Sometimes you have girls who are very brilliant but are forced into early marriage. We can let parents be aware of advantages of their daughters becoming scientists and that they can gain more from the girls when they are scientists than when they get married as early as 16, 17 or 18. Like it happened a few years a go, we can call social gatherings with a talk by someone on ‘women in science’. We can give them examples, maybe by playing movies of successful women in science. This can work wonders.

We need to get guidance counsellors for these young women because some of them should have opted for these courses but since they don’t have the background and counselling, they say “this is a male subject so I can’t do it”.

Another angle to this is to lead as a model, by example. I have so many postgraduate female students and many of them have gotten PhDs through my guidance, counselling and encouragement. But if I don’t let them come near me, they will be scared. And once they are scared of you, they are scared of the subject. We need to tell them that this subject is not as difficult as they think. If it’s possible, get women to teach women. ‘Seeing is believing’. They will eventually see that it is practical and that this is a subject that can be dabbled into and not fearing it because ‘people say…’

Finally, as women scientist, we have to establish good relationships with younger women scientists and even among ourselves, so we can all get along with each other. Leading women scientists must develop a leadership style that will be highly prized. This L’Oreal-UNESCO Award given to me is a big challenge; it has strengthened me to continue to encourage girls and women to participate in the development of science and technology by offering these core sciences courses in schools and universities. This invariably furthers the development of a Nation.“