D'banj: "I Would Love to Have Genevieve as My Wife...She's a Treasure" 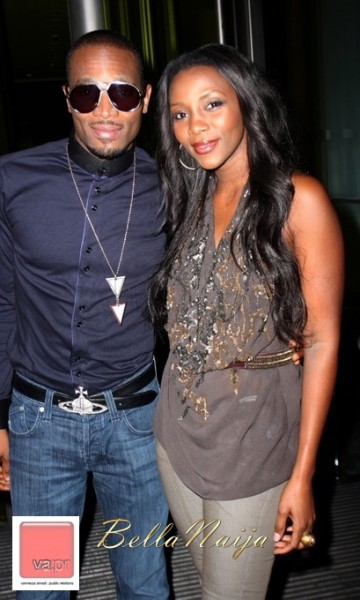 Now this a wedding we will love and hope to see.

The media parley was to kick-off the 2013 Hennessy Artistry show.

Punch Newspaper‘s Jayne Augoye was present at the conference. She spoke to Bangalee on the upcoming show, celebrating 10 years in the music industry and Don Jazzy.

He also spoke on his relationship with Nollywood star Genevieve Nnaji.

Read Excerpts from the interview;
On being romantically linked to Genevieve: Apart from the fact that she is my friend, she has been a part of my success. There is no way you are going to tell my story that Genevieve’s name will not come up because she featured in my biggest song of all time, Fall in Love. So if E! True Story comes to Nigeria to interview me, she will definitely be called upon to tell my story.

On possible dating: I would love to have Genevieve as my wife. We never can tell what God plans for us in the future. I have studied her and I realised that anyone that has her as his woman has found himself a treasure. Just like the Bible says, any man who finds a wife, finds a good thing.

On Don Jazzy: If I say I don’t miss Don Jazzy, I am lying. I have spent the better part of my career with him. I was married to him in a way (laughs). So I miss everything about Mo’Hits: the family, the movement, and the vibe of being in the studio with him. I miss the jokes and the arguments, but I have since keyed into the notion that nothing can stop a moving train.

Nevertheless we can always do music together. The track, ‘Top of the World’ was produced by a Grammy Award Winner. The songs ‘Finally’ and ‘Don’t Tell Me Nonsense’ was produced by my producer while ‘Oliver Twist’ was produced by Don Jazzy. So, why won’t I have him on my 10 years anniversary album?

Photos from the press conference

It’s the Sallah Fiesta! Get 15% Off any Movie Ticket this Sallah Holiday | Get tickets for Silverbird & Genesis Deluxe Cinemas Now on Tripican.com