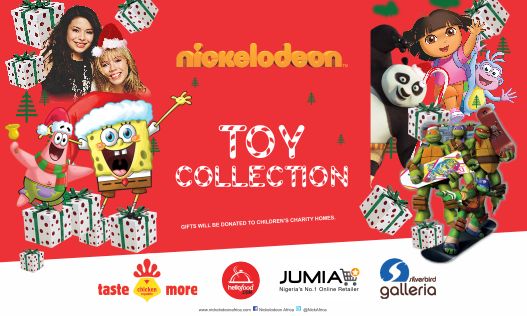 To celebrate the upcoming holiday season and to bring a seasonal sparkle to the eyes of Nigerian kids and families, children programming TV Station Nickelodeon has teamed up with the Silverbird Galleria, Chicken Republic, Jumia and Hello Food to bring a super Christmas to Lagos!

Nickelodeon is giving its own giant gift to the kids and families of Lagos by erecting a colossal, fairytale Christmas tree outside the Silverbird Galleria in Victoria Island. Laden with glittering lights, tinsel and multi-coloured baubles, the Nickelodeon Christmas Tree promises to bring a twinkle of goodwill into the eyes of everyone who sees it, big or small.

The event which will be hosted by MTV Base VJ, Ehiz will have Senior Vice President, Viacom Africa, Alex Okosi, Roy Murray Bruce and other members of the Bruce family light up the big Christmas tree right before the carols begin.

Nickelodeon is also launching the Nickelodeon Toy Collection scheme for children at the SOS Children’s Village in Isolo, Lagos which cares for hundreds of children from kindergarten to age 15. With the spirit of Christmas, interested families can participate by coming down to the event to donate a toy for a child in need as well as select branches of Chicken Republic around Lagos between Wednesday 11th to Tuesday 31st December 2013.

BN Do It Yourself: Sparkle & Shine on a Budget! Check out How to Make a Chic Sequin Top

Banky W on his Relationship with Andrea Manuela Giaccaglia: “She is a Friend…I am 100% Single”