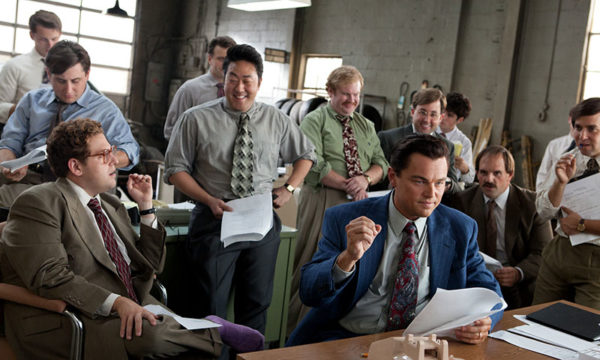 Synopsis
Martin Scorsese directs the story of New York stockbroker Jordan Belfort. From the American dream to corporate greed, Belfort goes from penny stocks and righteousness to IPOs and a life of corruption in the late 80s. Excess success and affluence in his early twenties as founder of the brokerage firm Stratton Oakmont warranted Belfort the title “The Wolf of Wall Street.” — (C) Paramount

The Wolf of Wall Street is pretty much the most amazing and energetic movie I’ve seen this year and I am fully aware it’s just the last week of January. Even with reference to its 2013 peers and fellow Oscar nominees  like Captain Phillips, American Hustle, 12 Years a Slave and of course the mighty , it still blew my mind.
Believe me when you are done watching this movie, you would be panting and sweating really hard from the amount of energy in it. Enough time spent trying to water your taste buds and let’s serve dinner

The Script
The movie is based on Jordan Belfort’s memoir of the same title telling the tale of how Wall Street stockbrokers lived extravagant lives by ripping people off. For a movie that was released on the 25th of December 2013, it has already gone into the record books as the movie with the most profanity in history with 500+ use of the “f” word. It also has so much drugs and alcohol in it, you might get high just by watching it. When you watch some of his movies just like this one, you get to see his(Martin Marcantonio Scorsese) strong Sicilian heritage speaking for itself.

The Terence Winter adapted script from Jordan Belfort’s same titled book isn’t all that deep, but you can’t deny its high energy. It’s easy to see why Scorsese chose one of the writers of the Sopranos. If you’re looking for that brain tasking script that will leave you wondering “what the hell bro?”, like Memento did, then this is not your thing.

However, if you’re looking to see Wall Street depicted as it really is, well, excluding a few excesses, then you’ll love what they did with Jordan Belfort’s “Wolf of Wall Street”.

The Directing
As amazing as this movie was, there were a couple of flaws with the directing/writing. There’s really no context. They showed us one end of the story – how the folks at Wall Street duped people of billions of dollars and spent it all on lavish parties, without bothering to show how it affected their victims. To someone, like me, who isn’t an accountant (and I believe a lot of people share this opinion) it was just like the money was hanging somewhere in space and they were just picking it out. I see nothing wrong with that, but can someone just please tell me the crime here? Also, there’s not much of a plot. Dude got rich, dude went to prison. Dude became a motivational speaker.

But you still have to give credit to the wonderful character development and the way the energy is cleverly spread across the movie enough to keep you glued through almost 3 hours of movie time. I believe Martin Scorsese’s history with substance abuse early in his career must have helped his direction of this movie. With all the profanity and nudity in this movie, I would say it was a pretty amazing movie.

The Acting
THIS!! This right here is the entire movie. Not the script, not the plot, not even the directing. The acting in this movie is definitely Oscar worthy.  It’s obvious with the five Academy awards nominations it has bagged that the actors did their job perfectly.

Di Caprio is a genius who has long been deprived of that golden statue. But with equally amazing performance from home boy Chiwetel in 12 Years A Slave and Matthew McConaughey in Dallas Buyers Club putting them in a lead ahead of him, I think he will once again miss the award. I am rooting for him to get this Oscars though.

It would be totally unfair if I didn’t give Jonah Hill some credit for putting up an amazing performance even though he was paid minimum wage (who pays Jonah Hill minimum wage for a movie role? Scorsese… That’s who) for his role as Donnie Azoff. Annoyingly brilliant. So brilliant it has earned him his second Oscar nomination.

The Verdict
I would advise everyone (above the age of 18 of course) to go see this movie. And if you have seen it, see it again. You might fall asleep once or twice because the movie has some boring parts but it definitely makes up for it in it’s climatic scenes.

That said, I would give this movie a  Soda and Popcorn.

So, have you seen it and what do you think about the movie? Do let us know in the comments box below. This review was brought to you by www.sodasandpopcorn.com. We Watch Movies So You (Don’t) Have To.