The biggest African American publication celebrates an epic year at the movies with its Black Hollywood portfolio in the March 2014 issue.

Lupita Nyong’o isn’t on the cover but the magazine couldn’t help but talk about the buzzed about actress with its “The Many Faces of Lupita” article. 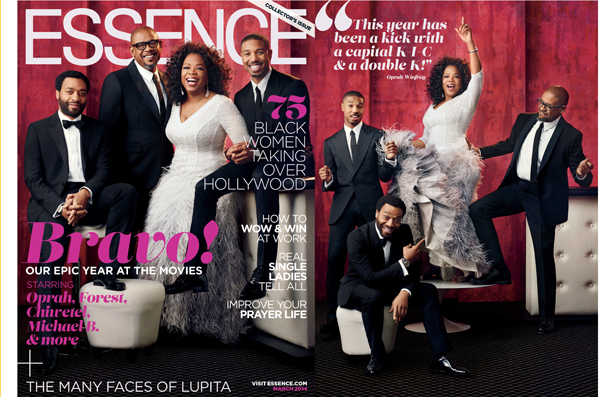 While preparing for her role as Gloria Gaines in the critically acclaimed film Lee Daniels’ The Butler, Oprah Winfrey’s acting coach told her she should be more sexy. “I don’t think of myself as being sexy and I’m not even sure how one is sexy,” she admits. Her acting coach instructed her: “Every time Gloria walks, pretend that she has a tail. And when Gloria sits down, she doesn’t sit without making sure there’s room for her tail.”

Chiwetel Ejiofor made a huge splash in this year’s 12 Years a Slave, but the role was a difficult one for the actor. He described it as walking the “fine line in between sanity and insanity.” After filming wrapped, it took the actor two months to “come out of it.” He describes why he pushed himself to the limit for the film: “Even though there were emotional moments to shoot, overall I think every member of the cast and crew was there for one reason: They felt it was a tale that deserved to be told.”