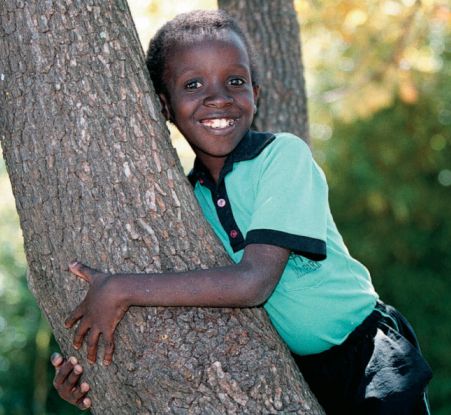 It was a year into the new millennium and my father had picked up the Guardian (As always). Unusually for me, I was able to take in the contents of the cover. Normally, my first port of call would have been the sports pages. The boy whose picture was there looked like my  peer and he looked so happy. I thought to myself  enviously “Who is this small boy and why’s he on the cover of the newspaper?” As I read, I got my answers. His name was Nkosi Johnson and he had just made his return to the right side of The Lord. His smile shone through. He had a story.

A couple of months later, on a Saturday afternoon I found the Nigeria Television Authority showing a documentary on him and watched eagerly. He was born with AIDS and given up for foster care by a mother whose state of health meant that she couldn’t care for him. A white family took this terminally ill black boy as their own. In a country like South Africa which was still smarting from apartheid, it had a feel good air to it. The lines of colour and race were blurred by this simple act of empathy and humanity. The documentary showed what he was going through and how he had risen to adulation when he was rejected by a primary school because of his health status. This got the attention of those who mattered and inspired a national conversation that would eventually lead to Nelson Mandela describing him as “an icon for the struggle of natural life”.

I am at a landmark age meaning that dinner suits, hotel ballrooms and restaurants are in.  Some people toe other lines; my friend, Bisola, a case in point. As her birthday loomed, she decided to use it as an opportunity to embark on a fund raising drive for those living with HIV/AIDS whose stories weren’t as fabled as Nkosi’s. When I asked what inspired her, the response was simple. “Shuga” referring to the MTV Africa show that set out to artistically create awareness of the virus. She was so impressed with the show that in her capacity as the Events Officer of the Afro Caribbean Society at the University of Coventry, she was able to collaborate with MTV and organize an HIV awareness week. Students were spoken to and given freebies like Shuga condoms and CD’s. It also featured a film night showcasing shows feeding the awareness theme.

As I interviewed her over lunch with another of our friends, her words paint a scary picture. She was able to generate £1,532.57 which she split and administered in three cities: Lagos, Port Harcourt and Abuja. Her choices informed by the fact that she’s from “Port Harcourt and Lagos and charity begins at home”.  Abuja was chosen because it is the base of the Network of People Living with HIV and AIDS in Nigeria (NEPHWAN) which she was referred to by UNAIDS. Upon meeting them, she realized things weren’t as she had imagined. The drugs were free of charge but the comprehensive tests to check one’s HIV stage were not; so with the funds she raised, she bore the financial responsibility for that. She added “They need certain supplements to take with the drugs but they can’t afford them because they tend to be unemployed: companies don’t want to employ HIV patients. I listened to everyone’s situation to understand where they were coming from and disbursed money based on that. I met over 60 people and they all have different stories that need to be told” .

She told me a story that had shades of Nkosi’s. One of the people she met had been disbarred from Madonna University. That annoyed me. It’s one of our greater flaws that we have a habit of engendering discrimination. In Nkosi’s case, the school had no choice than to grant him admission because discrimination on health grounds is outlawed in South Africa. Bisola tells me that there is no bill that mirrors this in Nigeria and upon research the only grounds discrimination is prohibited against are “origin, sex, religion, status, ethnic or linguistic association”. Linguistic association?

Nkosi Johnson is a hero. Despite his condition and youth, he took a stand. This child who had come to national attention was able to go a step further and capture the ears of the world when a year before his death, he gave a speech at the 13th International AIDS conference chiding then South African president, Thabo Mbeki for not doing enough in challenging the AIDS scourge. Mbeki left the conference before Nkosi finished speaking. Nkosi humanized AIDS. This innocent angel who was suffering through no cause of his own smiled as he boldly made this cause that deprived him of doing things little kids should have been doing his own. It pointed out to us that “You can’t get AIDS by hugging, kissing, holding hands. We are normal human beings, we can walk, we can talk.” He transcended the race barrier. He transcended the health barrier. And as his story inspired the nine year old me, I hope this touches you to make sure this conversation is heard. To Gail Johnson who opened her heart and her home to Nkosi, I doff my heart.

“Every time we witness an injustice and do not act, we train our character to be passive in its presence and thereby lose all ability to defend ourselves and those we love. In a modern economy it is impossible to seal oneself off from injustice… If we can only live once, then let it be a daring adventure that draws on all our powers. Try as I may I cannot escape the sound of suffering. Perhaps as an old man I will take great comfort in pottering around in a lab and gently talking to students in the summer evening and will accept suffering with insouciance. But not now. Men in their prime, if they have convictions, are tasked to act on them. ”

Bisola recorded some of the stories she heard. Watch the video here: