Mya Williams: Your Child Is Yours Not Mine 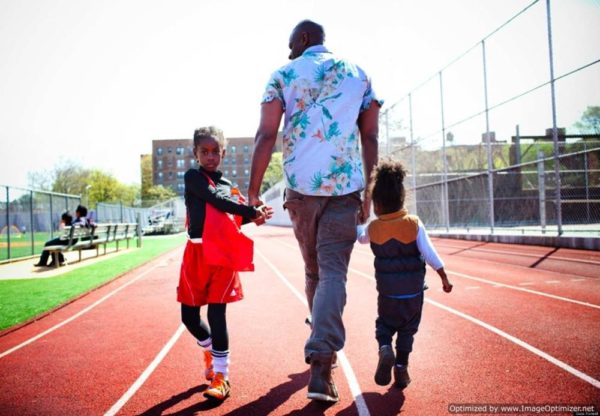 My best friend and I decided to take a trip out of town. On the day, we got on the train and settled into a booth. Shortly after we had settled in, a lady and her daughter who was about four years old boarded the train and took the two available seats opposite us in the same booth. My friend and I said ‘hello’ and continued chatting away.

A short while into the journey, the little girl got restless which was understandable for her age; she started swinging her legs back and forth, getting off and back on to her seat, amongst other things. Allow me to ,at this point, describe the booth clearly to you; it was one of those that had no table in the middle, we were facing each other with nothing in between us, so in essence we could touch and touch we did – especially as I was the one sitting directly opposite the little girl.

She continued to swing her legs as far and might I add, as hard as possible and every time her feet hit my shin, I’d tuck my legs even further away to avoid the pain of another impact. That was all still fine. However, what baffled and pissed me off the most was that this was being observed by her mother and not ONCE did her mother say to her to stop it. Neither did she offer me an apology or get her daughter to apologize.

She would just smile that “you know how kids can be” smile at me and shrug her shoulders. Literally seconds after my friend and I had decided we were changing seats, the little girl produced the final straw that broke the camel’s back. She stopped swinging her legs and rested her feet on my knees, such that the sole of her little pink sandals were resting on my cream trousers. I was in so much shock, my mouth fell open! I immediately whipped around to look at her mother, definitely expecting a solid apology this time and immediate nonstop placation, only for me to be given that smile again.

I didn’t know when I slapped the girl’s legs off me; both girl and mother were shell shocked. Even after displaying such bad behavior, the mother had the nerve to say to me “that was unnecessary, she’s just a little girl”, to which I responded “then you either need to discipline her or take responsibility for her actions, after all she’s your child not mine”.

It seems a handful of parents have this mentality, definitely not ALL and not the majority either, but a good number do. I don’t think we should assume that because we have chosen to bring children into the world and we love them, therefore everyone else must love them and tolerate their idiosyncrasies just like we do.

What happened to simple politeness and teaching your child good manners, rather than just expecting everyone else to deal with it. This is how we breed spoilt children. Please don’t misunderstand me, kids are part and parcel of the fabric of society. I have two lovely nieces myself, whom I love to pieces, but even as their Aunty (and Godmother of one), I try to ensure that I set them straight when they go wrong. They both have their “please” “thank you” and “sorry” locked down and they are 3 and 5. It is all in a bid to help them grow into decent, polite and well-mannered adults.

Let us not forget, that while we are celebrating our own “choices”, there are many men and women out there who do not even want children and that is their own choice and it should be respected. Now, imagine the look such a man or woman will give you when you tell them “she’s just a kid”. He or she is not obliged to “understand” your child’s bad behaviour. Frankly, they don’t know you, probably couldn’t care less or may not even like kids.

I broached this topic with a few people and below are some of their experiences and some of mine:
Bringing infant kids or toddlers to the cinema – One time I was at the Genesis Cinema at the Palms, Lagos, to see a movie and there were no less than four young children in there, crying at different times (it was not a kids movie). Not once did any of the parents step outside to appease the child as a sign of courtesy, when the crying became incessant. Now I can barely say I watched that movie.
Changing diapers at the restaurant table, rather than getting up to go to the restroom to do so.
Holding the door open for a mother to push her buggy through, only for her to breeze past with not so much as a backward glance, talk less of a “thank you”.
Leaving your child to wander around the church hall, restaurant, department store etc – Assuming he or she will meet a smiling face at every stop – How about the fear of kidnappers if nothing else?
Allowing your child to cause a raucous in the grocery store – Just because he/she feels like it or because they didn’t get the toy they wanted.
Not SEEN to be trying to appease a wailing child on the plane – Now I know this one is tough but at least TRY. The plane is filled with people with different objectives (business, leisure, medical etc). Don’t say “they will understand”. I once observed a woman on my flight with her 9 month old, the boy cried literally almost every 20 minutes for at least 5 minutes each time, yet she never stopped trying and throwing apologetic looks around the cabin.

The sheer effort made me get up and ask if I could help, I ended up taking him on a walk round the cabin, I did a couple of laps, which quieted him for a while.

Raising kids is no easy feat; parents should be commended, especially mothers around the world who have taken on this job, one that comes with no pay and is usually taken for granted. Most say the love of the child is reward enough. I, however, urge parents to please take cognizance of people around them and be receptive to others needs as well.