Nkiru Sylvanus on Possibly Being a Second Wife & Relationship with Gov. Rochas - Video 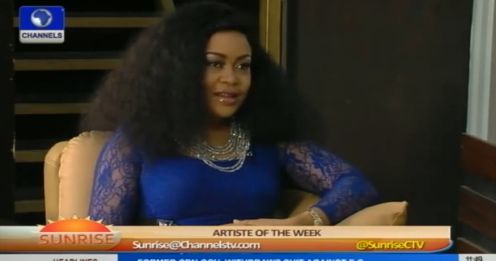 It is her view after all.

To promote her new movie “The Voice“, which will premiere on Sunday 13th July 2014 at the Oriental Hotel, Lagos, Nkiru Sylvanus visited the Channels TV studios for an interview on Sunrise.

Nkiru talked about opting out of studying medicine after two years for mass communication, her awards, perfecting the art of crying in movies, and her bright future.

The conversation later shifts to Nkiru’s personal life, the actress declares that she is single but not searching.

When asked by a co-presenter if she could be a second wife,  the actress said “it depends on who and the condition” she says, “yes (I’ll seriously consider it), if the situation is right and the person is a good person, because there are situations and conditions that can actually make you find the right person in the wrong place and at the wrong time.”

Nkiru also talked about her relationship with Governor Rochas Okorocha