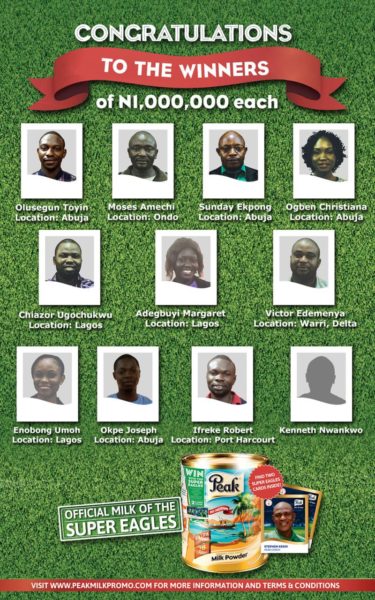 Consumers who purchased a tin of Peak powder 400g during the period got 2 Super Eagles cards inside each tin and each card came with a unique code behind it. Consumers participated in the promotion with a view to win One Million Naira each by submitting entries (unique codes) for 11 different players plus a coach Stephen Keshi card via SMS to 38120 or www.peakmilkpromo.com.

The first 11 consumers who submitted complete entries have won One Million Naira each.

Peak team would like to use this medium to appreciate Consumers for their participation in the promotion and hope that consumers will continue patronizing our brand.

Here is the list of eleven, 1 Million Naira Winners:

Over 70 Nigerians in Prisons in Abidjan