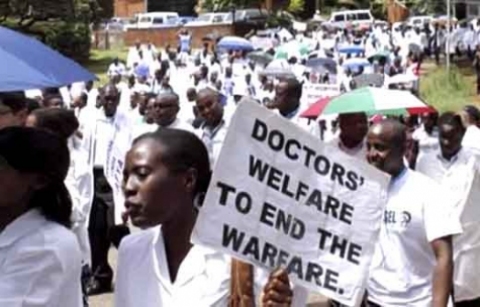 Abuja (NAN) – The Nigeria Medical Association (NMA) has suspended its 55 day-strike to resume work on Monday.

Obembe explained that the suspension was the outcome of the emergency delegates’ meeting held on Saturday (Aug. 23) in Abuja.

“Delegates resolved to suspend the strike in the interest of urgent national emergencies while negotiations continue.

“Consequently, all medical and dental doctors are hereby directed to resume duty at their working posts with effect from 8.00 hours of Monday.

“The NMA enjoins all her members to remain calm while negotiations continue,’’ he said.

Obembe said the association demands were centered on improvement of the structure and tradition of the profession which had to deal with clinical governance and redress of injustice.

He said a circular had been issued that only doctors whose degrees were registered with the Nigeria Medical Council would be given the title consultants.

“Also the post of Deputy Chairman, Medical Advisory Committee had been reinstated.

“The government has attended to us that there is no effort to repel or redress the decree establishing the position of Chief Medical Directors.

According to Obembe, delegates also demanded immediate withdrawal of the government circular suspending residency training programs and sack of more than 16,000 resident doctors, who constitute about 70% of doctors’ workforce.

He said delegates commended the efforts of the Federal Government and Lagos State Government in containing the spread of Ebola Virus Disease.

The President reiterated the association continued commitment to catering for the health of Nigerians, saying it looks forward to improving and sustaining cordial relationship with the Federal Ministry of Health.

Obembe expressed the association’s gratitude to all Nigerians for their interventions to resolve the strike.