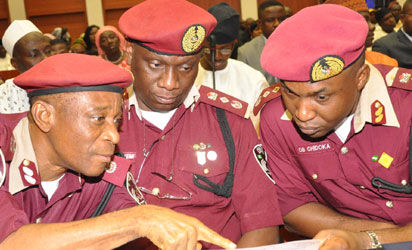 He stated this at a conference organised for unit commanders of the commission on Thursday in Abuja.

“We are going to introduce flying tickets for traffic offenders which will enable our men and other road users to be able to report offenders by providing concrete evidence to us for prosecution.

“The picture of traffic offenders can be taken with mobile phone or any device that has camera.

“What we need is the number plate of the vehicle and may be the picture of the driver, time and location.

“Once they send these data to our site or telephone number, we will search for the vehicle through Auto Reg. Data Bank and send the fine to the offenders.

“We are almost concluding on getting the necessary approval as we are still consulting with stakeholders and standard organisation of Nigeria (SON) to agree on speed limit,’’ he said.

Oyeyemi said the fine could be as much as N50, 000 for anyone found guilty of the offense in order to serve as deterrence to others.

The corps marshal also called on its officers and men to be more dedicated to duty in order to reduce road crashes and fatalities in the country.

According to him, the 15 per cent and 25 per cent reduction in road crashes and fatalities respectively which the commission targeted to achieve by the year 2020 must be realized.

He said: “The unit commanders are the first line officers, hence, the need for them to be properly briefed on the objectives of the corps for efficient performance.

“It is our duty to crash the volume of crashes on our roads so that casualties will be highly reduced; we hope to get the full cooperation of stakeholders.

“We have been recording success in that direction but we still need to do more.

Our units will be more equipped with operational needs like vehicles, protective devices among others.’’