Loved the Deola by Deola Sagoe/CLAN SS14 Collection from NYFW? Watch the Showcase on the Runway! 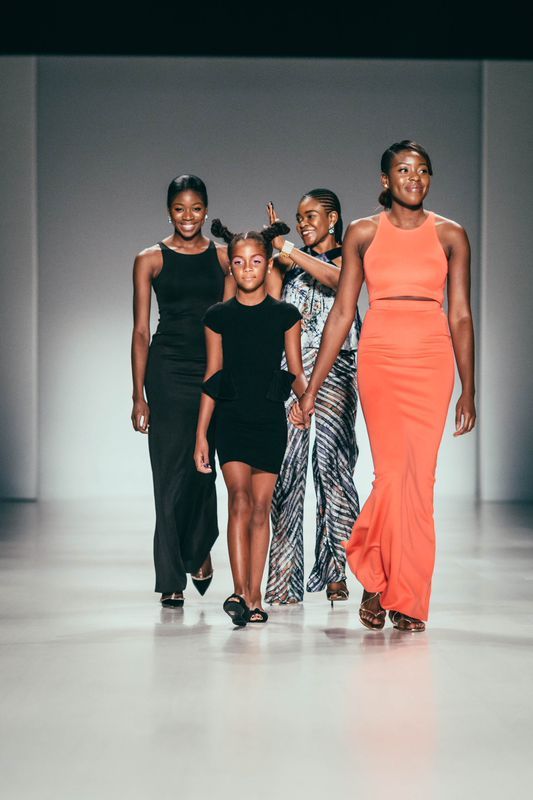 We were all excited when Deola Sagoe‘s design label Deola and her daughters’ label CLAN hit the runway at Mercedes Benz New York Fashion Week 2014; and the collections did not disappoint. Click here to see the collection. The collections were part sponsored by Access Bank.

The detail and aesthetic had everyone buzzing and we are excited to be sharing the video from their showcase today.

The video starts off with the CLAN showcasing their “Kasumi” collection which took on a sporty-chic theme with a Japanese vibe tying in the hair & makeup to the pieces. They also debuted their kids line with an adorable model. The numbers 24 and 13, which are embroidered on the back of some of the pieces, are significant to the three sisters behind the brand, Teni, Abah and Tiwa Sagoe.

According to Teni Sagoe, Creative Director for CLAN, “The constant references to the child in the chosen Japanese names for the Kasumi Collection allude to the idea that the younger self is the most unaffected and possibly the purest expression of one’s personal style. Channel your inner child.” Names of the pieces include Tamiko (child of the people), Michiko (child of beautiful wisdom) and Aiko (beloved child). “The rich Harajuku culture in Japan and its spirited message of creative freedom also inspired us to look beyond the frontiers of sportswear and to incorporate gypsy-like drapery into our silhouettes.“

Deola’s 37-piece collection titled “Wings by Deola” hit the runway next with its old Hollywood beauty and feminine appeal. The inspiration was gotten from Deola’s youngest daughter, Tiwa. She said Tiwa “did a class project, which was kind of part artistic, part science about moths, flies, butterflies and such, and just how visually stunning, intricate and magical these creatures can be when you really study them”.

On designing the collection Deola said “Well, I broke out my sketchpad and got to drawing and like the moths, I was buzzing around with all these concepts and the graphics came pretty easily. I like designing when it’s like an exhalation and you just bring forth all these things from the recesses of your mind. Sometimes you are as much a spectator as anybody else even though it’s your own work; that’s a great feeling.”

On a final note Deola said “The House of Deola Sagoe, with me and my daughters, and what they are doing with the Clan label, frankly blows my mind. It’s just moving into a very interesting space right now“. “After 25 years of being in this business you do pick up a bit of knowledge here and there, about what it means to be a woman, what it means to be your own woman, what business we are in and how to deliver the best we can. It’s a generational thing now; it was given birth to and well it’s living and doing its thing.”