Alfred Ajani is proof that thinking outside the box when pursuing one’s dreams is the key to success.

Last month, BN told you about Ajani, the 22-year-old Coventry University graduate who was unemployed for several months, and decided to stand at Waterloo train station holding up a placard advertising his degree and credentials.

You will recall that his unusual job-hunting approach attracted the attention of many commuters, including company bosses, who stopped to talk with him to discuss potential positions and pick up CVs.

Ajani, who appears to be of Nigerian parentage, didn’t want just any job – he was looking for a career specifically in Marketing, which is what he studied in the university.

He  has since landed his dream in a marketing position at the Asoria Group, a recruitment agency, Daily Mail reports.

The director of the company just happened to be at the train station on that day. And although he wasn’t one of the people that stopped to talk to Ajani, he later got in touch with him via Linked In.

The company was looking for candidates who had the ability to “think outside the box,” and the enterprising graduate proved to be the perfect candidate.

“The job is one I wouldn’t have got if I hadn’t gone to the station that morning, so I advise anyone out there who is in the same position I was to think of more direct ways to speak to employers,” says Ajani. 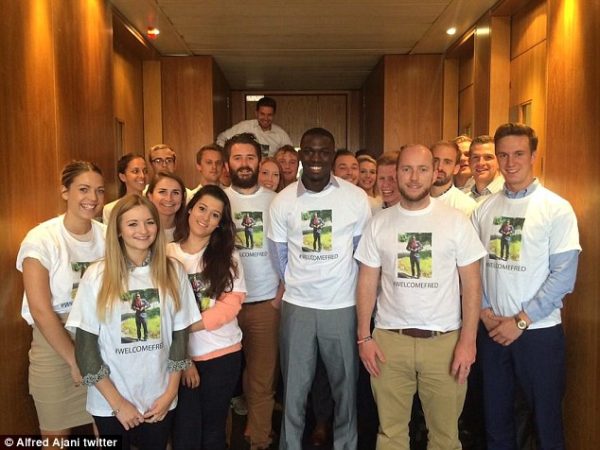 Alfred Ajani’s first day at work! His colleagues wear some awesome t-shirts to welcome him 🙂

We’re definitely inspired! And we hope you are too 🙂 Dream big!