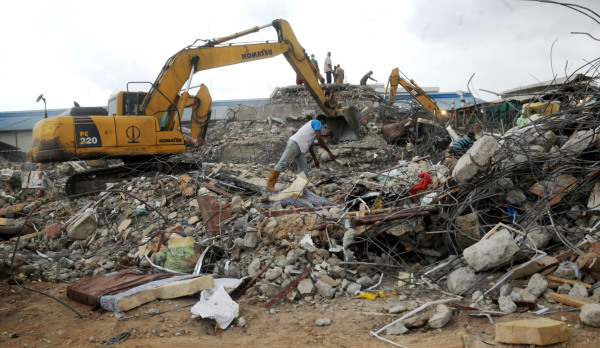 A Lagos-based lawyer, Olukoya Ogungbeje, on Tuesday filed a suit in a Federal High Court, Lagos, seeking an order to stop further inquest into the collapsed Synagogue Church building.

The News Agency of Nigeria (NAN) reports that on September 12th, a six-storey building within the premises of Synagogue Church of All Nations collapsed in Lagos.

The incident led to the death of over 100 people, most  of whom were foreigners.

The Lagos State Government on September 26th, constituted a Coroner’s Court to unravel the circumstances leading to the incident.

The coroner has already visited the scene of the incident and summoned the General Overseer of the Church, Prophet T.B Joshua, to appear before him on November 5th.

Meanwhile, Ogungbeje, in the suit, is seeking an order stopping further inquest into the matter.

The defendants in the suit are  Lagos State Government,  Attorney- General of Lagos State,  Ade Ipaye, and Komolafe.

The lawyer said the composition of the Coroner’s Court was a negation of the principle of natural justice and Section 36 of the Constitution, and as such,  unconstitutional and void.

He averred that the inquest was constituted by the Lagos State Government after the agencies of the state government had indicted the church of erecting additional structures on an already existing building without approval.

Ogungbeje argued that if allowed to continue, the proceedings of the Coroner  would occasion a miscarriage of justice, as the same Coroner would base its decision on the testimonies of the same agencies of Lagos State.

Ogungbeje averred that the Lagos State Building Control Agency went ahead to seal up the main building of the church.

The lawyer is therefore, seeking an order nullifying the composition of the Coroner and the proceedings so far, as well as an order of perpetual injunction, restraining the defendants jointly and severally from further proceedings.

He wants every sitting, investigation, fact finding or any action in any manner whatsoever on any facts connected to the case, to be put on hold until the suit was determined.

The suit which was filed on Tuesday has yet to be assigned.

Related Topics:Synagogue Church of all Nations
Up Next