Ready for the Glitz, Glam & More from GIAMA 2014? Your Guide to Getting the Perfect Look! 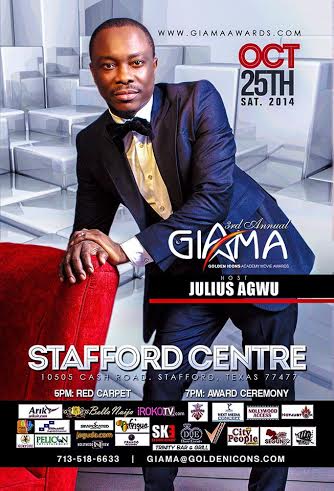 Exactly one week from now, the most anticipated African movie awards in North America, the Golden Icons Academy Movie Awards (GIAMA) will be taking place live at the Stafford Center in Houston, TX. The event will be hosted by none other than the comedic genius Julius Agwu and promises to be an event like no other, full of fun, entertainment, and glam.

Since the inaugural edition of the GIAMA in 2012, the organizers of the event have continued to raise the bar in putting together a show that leaves a remarkable memory with the audience – from the elegantly-designed theatre setting, comedic performances, musical entertainment, glitzy red carpet graced by several A-list actors and actresses already confirmed to be in Houston for the event, top media personalities and several dignitaries, the 2014 GIAMA is definitely an event you cannot afford to miss.

As the anticipation for the event continues to spike, so is the thought of what to wear for a formal and glamorous show like the GIAMA. Definitely, the ladies have to be all glammed up in their dazzling, eye-candy dresses accessorized with the perfect adornments, while the guys are sure to represent for the male generation in their perfectly cut-out tailored suits and bow-ties.

Last year, Golden Icons media anchor, Emma Emerson had an interview with Ebele Iloanya of ModChic Couture as part of the GIAMA 2013 pre-event fashion show to discuss fashion do’s and don’ts of an event like the GIAMA. As a fashion and styling expert, Ebele was able to shed more light on fashion rules and tips guiding the choice of picking out an outfit for a glitzy event like the GIAMA.

Watch the Fashion tips for GIAMA by Modchic Couture below

So, as we all warm up for the 2014 GIAMA on Saturday 25th October 2014 – make sure you have your perfect outfit picked up to ensure you flow with the glam of the day. For more information, you can visit www.giamaawards.com

Watch the GIAMA Promo with Julius Agwu below