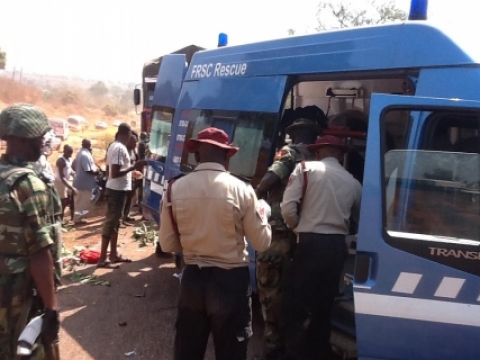 Eleven female politicians from Bayelsa on Saturday night died in a ghastly auto crash, while one person survived from the wreckage of their vehicle, which burst into flames.

The accident occurred at the Ahoada axis of the East-West road in Rivers.

The Bayelsa Sector Commander of the Federal Road Safety Commission (FRSC), Vincent Jack, confirmed the development to the News Agency of Nigeria (NAN) on Sunday in Yenagoa.

He explained that nine of the 11 persons were burnt to death, while the remaining two died without burns.

“Many others who sustained injuries during the accident were rushed to Madonna clinic in the area,’’ Jack said.

He said the accident occurred when the tyre of a Toyota Sienna car burst and rammed into the bus carrying the women.

“The car then also rammed into the bus in confusion, a situation which led to the bus going up in flames,’’ Jack said.

NAN gathered that the Coaster bus in which the women were traveling in bore the inscription “Women For Change Initiative’’, a non-government organisation (NGO) promoted by First Lady Patience Jonathan.

According to The Nation, the deceased had paid a solidarity visit to Patience Jonathan in Okirika where they spent two days.  It was while returning from the visit that the accident reportedly occurred.

First Lady Commiserates with Bayelsa Government Over the Politicians’ Death

Patience Jonathan, on Sunday commiserated with the Bayelsa Government over the death of the women via a statement by her Media Assistant, Ayo Adewuyi:

The First Lady prays the Almighty God to grant the souls of the deceased eternal rest.

She also prays that God will give the families the fortitude to bear the irreparable loss.

Photo Credit: newtelegraphonline.com (*photo is for illustrative purposes only*)