Munir Bello: The Question of Black Men & Their Affinity For White Women 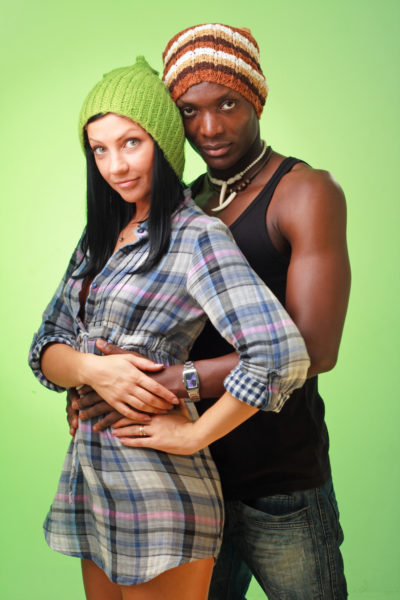 So many times I have been on dates and been asked, ‘why do black girls have so much attitude?’ The A word has been synonymous with the black female for as long as I can remember. I have been in clubs and I’ve seen guys looking at a group of black girls but failing to approach them. Their excuse? ‘Well they’re just going to give me sh*t.’

I asked a few people different questions on this matter to try and get to the bottom of it, as another question I’ve been repeatedly asked which relates to this matter is, ‘Why do black men prefer white women?’ I interviewed girls of all races to get their take on the matter and I also took this question to some men to get more of an insight.

So, the first time I got asked that question, I was very taken aback. It was asked with such confidence by a girl I was on a date with. I remember it like it was yesterday. Making small talk, I was having a White Russian and she was drinking a June Bug. She pulled out the pineapple on the side of the glass, took a bite and then looked at me twice before saying, ‘I’ve got to ask you something that I’ve been trying to wrap my head round. Why do black men prefer white women?’ It was one of those moments in your life that’ll always stick with you. I decided to get my dictaphone and notebook to get to the bottom of this mystery.

The first girl that I spoke to was a white girl who had been involved with a black man. He told her that he preferred white girls to black girls, because white girls are more chilled out and have less attitude than their black counterparts. She said, ‘Pretty sure if I was blue or green with yellow spots he would’ve said I was still his type just to get in my pants’. Another girl I spoke to was told that white girls are more chilled and less maintenance.’ This, once again was said by a black guy that she was dating.

The first black girl I spoke to said, ‘We do have an attitude. An attitude of self respect’ Many of the girls felt that they were limited in the workplace in terms of how they conduct themselves. They felt that if somebody said something unkind to them that they had to choose their words carefully before retaliating or in some cases let it slide so as not be accused of having an attitude problem. They also did believe that men were less likely to approach them in a bar because the men found them intimidating. Black girls said they could understand somebody being stand offish with them if they were from another race as maybe this man hadn’t come into contact with many black girls in real life. The girls were less forgiving of black men tarring them with that brush as they felt that it was an unfair remark which was also harmful to that mans mother and other relatives.

I spoke to some black guys who exclusively dated outside of their race, some black guys who only dated black women and some black men who were equal opportunity daters to see if black men really do prefer white women. The first guy immediately threw the A word into the conversation. He said he’d tried approaching black girls in the past and was left feeling humiliated, so as a result never went back. The other guy I spoke to simply said that he didn’t find black girls attractive, although he had been with black girls in the past he felt that white women were more attractive and more sexually satisfying (he was very keen to stress this point). One guy did openly admit that he’d told white girls he’d dated that he didn’t date black girls because of their attitude. He said the reason for it was to get the white girls into bed and to make them feel special by lying to them.

The guy who only dated black girls stated, ‘My mother is black, my sisters are black and they are the most amazing women that I know. I could never put down a black woman because it reflects negatively on our race as a whole’ He also went on to say ‘It pisses me off when people are dismissive of black women and labelling them unfairly without getting to know them’ Like me he had been asked why black men prefer white women on numerous occasions and he couldn’t understand why the assumption was made without his actual preference being asked.

A black woman has had to put up with many barriers just like other minority groups. There has been an objectification of black women since the days of slavery and it peaked during the days of The Cotton Club during the 1920’s, blaxploitation movies in the 1970’s and still goes on in hip hop videos to this day. As a result it has made many black women cautious when they are approached by any male as to whether this person has a sincere interest in getting to know them or if they are simply trying to get into their knickers. The black woman has always unfairly been portrayed as angry and loud. Their traits of speaking their mind and not standing for any nonsense would be rewarded with a senior role and plenty of kudos if they were white men. My mother, my sister, my wife and countless other positive women in my life are black and I don’t think they have an attitude in the slightest.

As for the other question of black men preferring white women. I don’t think that this is the case at all. It just happens that the black guys who prefer white women tend to really speak about it, therefore creating a misconception that it is the general consensus. There are many black men in relationships with black women who live in Africa and the Caribbean but those men don’t feel the need to speak about the race of their partner as it’s not an issue.

Related Topics:Black men and white womenInterracial relationshipsMunir Bello
Up Next

Anne Adams: The Shattered Dignity of the Modern Black Woman