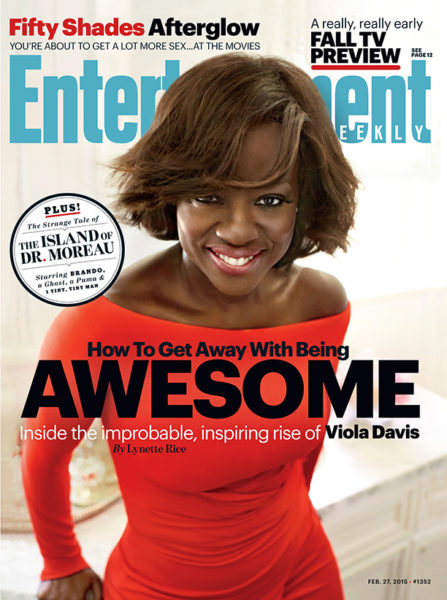 Hollywood actress and star of new ABC series How to Get Away with Murder Viola Davis is the cover star of the latest issue of Entertainment Weekly.

In the magazine, the 49-year-old actress talks about the struggles of finding work for an actress of her age despite having two Academy Award nominations under her belt, and doing sex scenes for HTGAWM.

On getting papped: I literally rolled out of bed and rolled into a Target with [my daughter] Genesis, and the paparazzi caught me. I wore a wool hat and my Jimmy Kimmel sweat jacket. I was just not looking great. But it’s not a big idea. Those are princess problems. In the grand scheme of life, that’s very minuscule to complain about.

On remaining relevant: There’s the reality of being an actor, especially after two Academy Award nominations, and there’s the fantasy. People oversimplify it by saying, start a production company, get your own stuff going on … as if it’s that easy. I’ve had a production company for years. We have great projects coming up, but it’s been a battle, okay? At the same time, you have to stay relevant because you have to be bankable to the foreign market. So when How to Get Away with Murder came along, I had my a-ha moment. I knew it would have a great time slot, and I would be a lead in a TV show. I’d get to play a role that’s sexualized, messy, all those of things I never get to play. And at the same time, I can be relevant.

On the sex scenes in ‘How to Get Away with Murder’: It was nerve-wracking, but I went for it. Anyone should be nervous doing very personal and private scenes. If you are not nervous, then something is wrong with you.

For more on Viola Davis pick up this week’s issue of EW.