The 3rd edition of the Africa Magic Viewers’ Choice Awards (AMVCA) at Eko Hotel on Saturday March 7 2015 was everything an award show should be. Glamorous stars, performances and touching moments made for a memorable night.

You’ve seen our First Look at the Red Carpet & Winner List, BN Red Carpet Fab, Best Dressed List and Most Controversial Red Carpet Looks, now we are giving you all the scoop on the funny, crazy and musical moments at the awards.

We would like to commend the MultiChoice/Africa Magic/M-Net team for a great job on what is fast becoming the most prestigious film and TV award event in Africa.

Here are our 10 Most Unforgettable Moments of the Ceremony!

Osas Ighodaro proved she’s not just another screen goddess when she led a dance and drumming troupe for the night’s opening performance. “What if I am African?”, she declared in a powerful spoken word piece. She was lifted in the air by able-bodied bare chested dancers, who also spun and jumped in the air for the acrobatic routine.

“What if I am African?” Powerful opening drumming/spoken word sequence! #AMVCA2015 pic.twitter.com/BOR9Gx23jh

Vimbai & IK in their 1st Looks

Zimbabwean Vimbai Mutinhiri and Nigerian IK Osakioduwa​ made an entertaining pair as the hosts of the night. With flirtatious and funny comments throughout, our highlight of their hosting stint was IK serenading and dipping Vimbai as they sang the blues while in coordinated outfits.

Vimbai & IK Matching in Red for their 2nd Look

Vimbai & IK in their 3rd Outfits 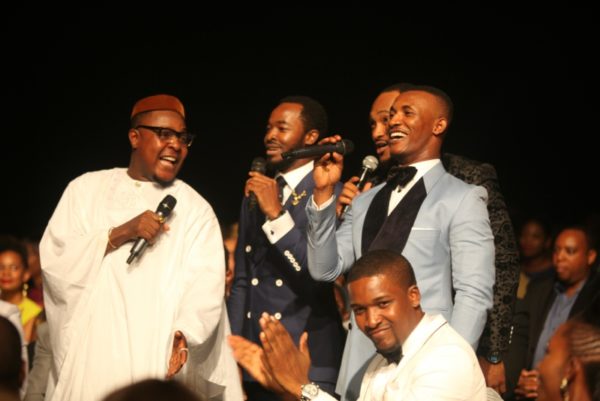 OMG! When Congolese Eddie Kadi compared the ‘toasting’ (wooing) and dancing styles of Nigerians, Ghanaians, Kenyans and Congolese, we almost fell out of our seats. From the jumping Kenyans to the calm and cool Ghanaians to Nigerians doing Azonto that looks like they’re washing clothes and then turns into Galala, to the pointing and waist winding Congolese, he ‘bodied’ it! 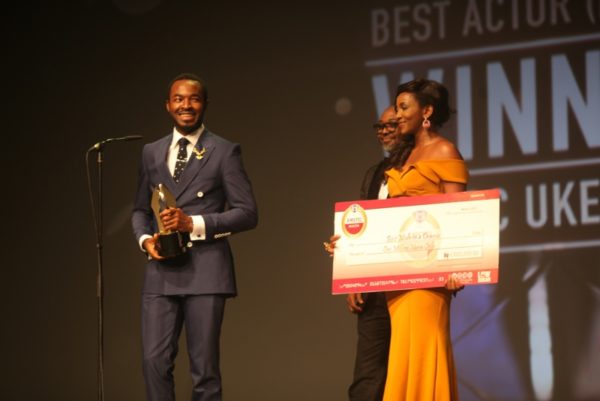 Brand ambassador for the big sponsor of the night, Nollywood superstar looked uber fab and topped most best dressed lists. Checks were presented to four category winners on stage. 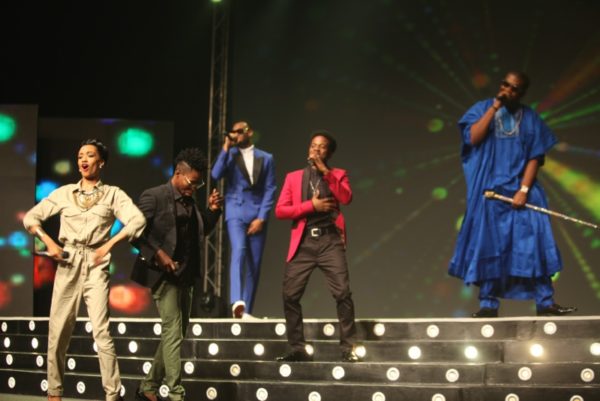 Don Dorobucci! Arguably the biggest and catchiest Nigerian tune in 2014, the song spurred so many slangs of doro-this and doro-that.Don Jazzy, Di’Ja, D’Prince, Korede Bello and Reekado Banks performed, as the crew was missing Dr SID & Tiwa Savage, who was in Uganda. We love seeing the hit-making Mavin crew.

The AMVCA Industry Merit Award honoured Amaka Igwe, and was given by Richard Mofe Damijo (RMD), after a montage of people who passed away in the movie industry in the past year, including Muna Obiekwe was shown. The late director’s husband and business partner, Charles Igwe, received the plaque on her behalf, stating that she wanted to leave a notable impact, and she succeeded at that. 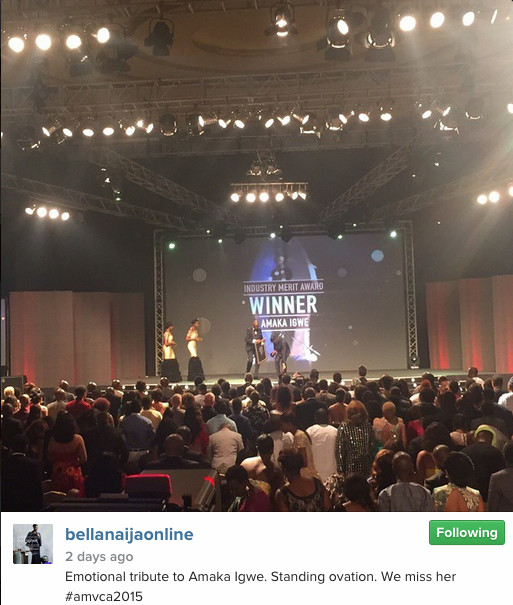 RMD, who had known her for over 20 years and worked with her from Checkmate and beyond, cried as he gave away the award. She received the only standing ovation of the night, a touching moment for all.

Only a comedian can get away with such shade! Whew. Basketmouth’s routine caused *gasps* and roaring laughter within the crowd. He started off talking about the gold/white and black/blue dress debate, citing experts who said people who see black and blue are depressed. He then said maybe Nigerians are ‘depressed’ because we see a lot of things the ‘wrong’ way.

“Patience Jonathan can speak English fluently, Tonto Dike can really sing, D’banj has been churning out hits and we actually have uninterrupted electricity”, among other digs.

Another person who got in on the joke wagon was the host IK, who said “the next performer is someone a lot of ladies would like to date … and have probably already dated,” when introducing 2Face Idibia. 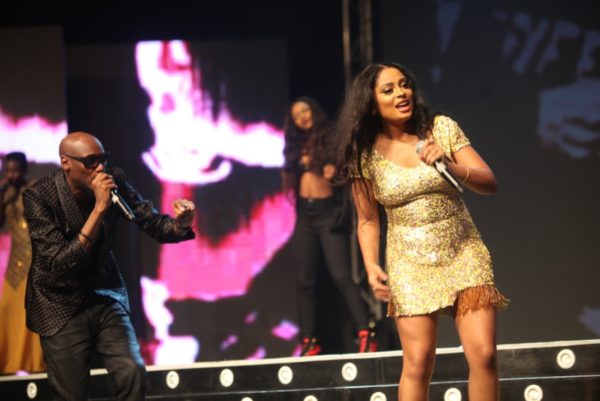 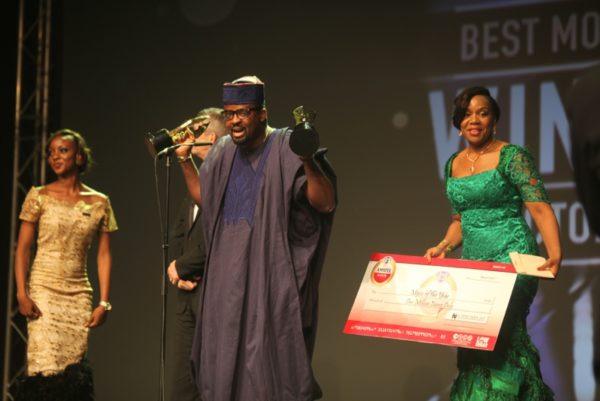 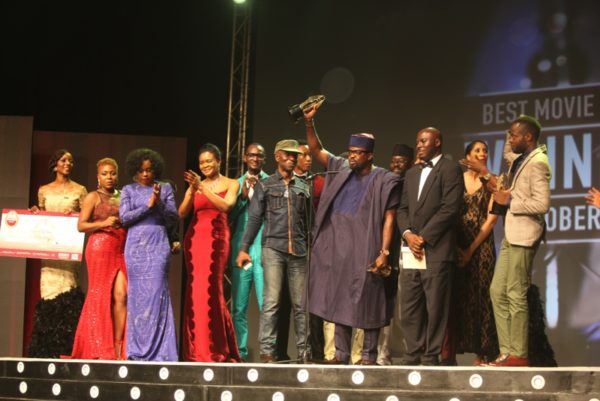 Award shows always have their ‘big winners’. The movies that set a new standard of African filmmaking in the recent years. Kunle Afolayan for drama, October 1, which won 9 out of 13 awards it was nominated for and Rita Dominic and Mildred Okwo for comedy, The Meeting were the AMVCA 2015 ‘big winners’. 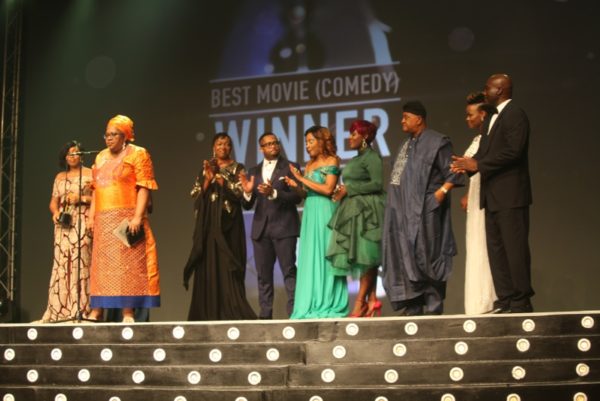 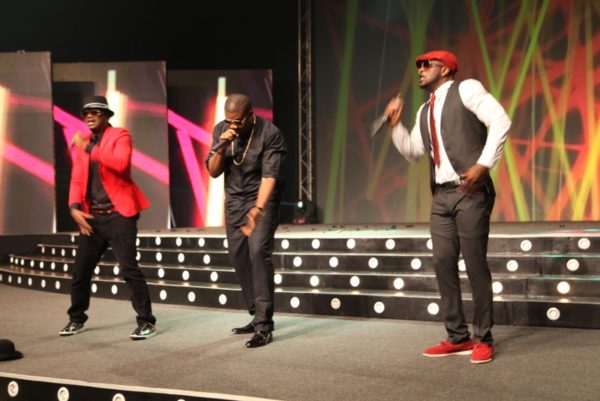 P-Square is always ‘double trouble’ but in a good way as they make their mark on the stage. They performed a rousing medley of their songs, including their latest hit, Collabo, with Don Jazzy, making his second appearance on stage that night.

It was a fitting way to end the fabulous night.

Bonus: A Little Banter and a Lot of Tear-Jerking Speeches

No award show is complete without the ‘little’ moments – the presenters’ banter, jokes and a few people going over their time slot to thank the people that helped them to their glory. Here are a few of our faves! 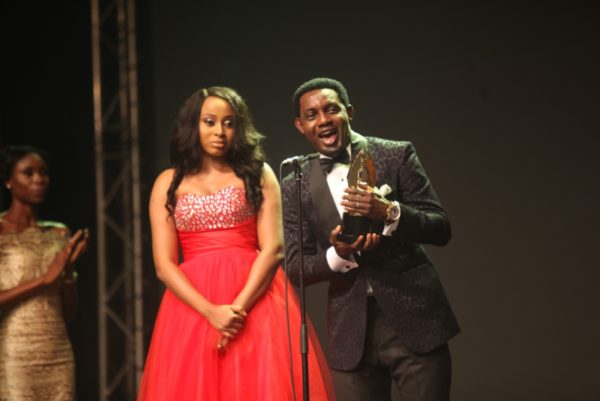 AY Makun is best known as a comedian, but he also made a pretty awesome comedy movie last year called 30 Days in Atlanta. He won the prestigious New Era award, presented by Rita Dominic, who won it last year.

AY mainly thanked his wife Mabel, who was in a red ball gown, who encouraged him to make a movie as she knows he enjoys making skits, after he complained that stand-up was becoming monotonous.

He received a black diamond encrusted watch from Chris Aire in addition to his award.

Helen Paul and Chinedu Ikedieze were too funny as they made fun of their heights, the mic stand positioning and more. The smiles on their faces in the above photo say it all.

Funke Akindele had everyone hollering when she spoke like the ‘razz’ Jenifa, a character from her unforgettable movie of the same title, when presenting an award.

It says a lot when your peers scream and get up from their seats in glee when you’re named a winner. The dapper Blossom Chukwujekwu elicited this response. He thanked his manager and more for pushing him and for the opportunity.

Standing ovations for Blossom! It’s great when your peers are rooting for you like this! #AMVCA2015 pic.twitter.com/tJqJUgGrER — BellaNaija.com (@bellanaija) March 7, 2015

All in all it was an entertaining show from the MultiChoice crew.