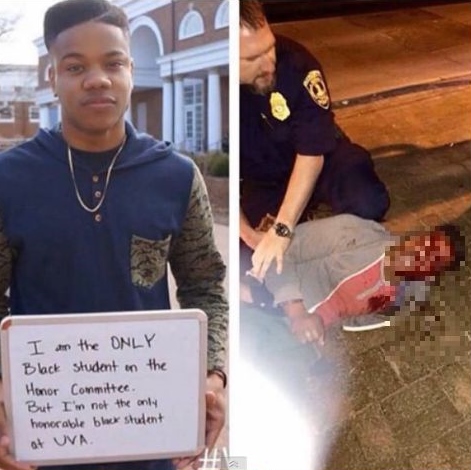 The issue of police brutality remains a hot button issue in the United States, especially as it pertains to cases involving racial minorities.

In more recent times, instances of brutality that resulted in the deaths of Eric Garner, and Michael Brown are still on the minds of many.

And now, another case involving police violence in the arrest of an African American male student of the University of Virginia is sparking outrage across the country.

According to CNN, the student, 20-year-old Martese Johnson, was on Wednesday arrested by officers with the Department of Alcoholic Beverage Control (ABC) in Charlottesville., Virgina, for being in possession of a fake ID card, and attempting to gain entry into a bar.

Johnson was reportedly standing on the sidewalk near the bar when the police officers approached him and proceeded to aggressively apprehend him.

Here is the video of the arrest. He is seen lying face down on the pavement, with blood flowing from his forehead. (Viewers’ discretion is advised, as it contains graphic images and explicit language).

“I trust that the scars on my face and head will one day heal, but the trauma from what the ABC officers did  will stay with me forever,” Johnson said in a statement read by his attorney on Thursday. I believe we as a community are better than this …we cannot allow the actions of a few officers to ruin the community of trust we have worked so hard to build,” he said.

However, reports state that “the arrest warrant for Johnson describes the student as “agitated and belligerent.” He was allegedly detained for public intoxication and obstruction of justice.”