This campaign has really opened our eyes to how much the president loves fitness! From his workout video (it’s a must-see click here!) to the first look at him and Patience at the gym in their downtime (see the first look at the #FitCouple here), now Reuben Abati, the President’s Special Advisor on Media & Publicity, has shared more photos, along with a release about a fitness march in Abuja tomorrow.

Here’s the release in it’s entirety,

“President Goodluck Ebele Jonathan will tomorrow, Saturday, March 7, 2015, lead government officials as well as sportsmen and women on an out-door physical training exercise in Abuja aimed at promoting sports and fitness in Nigeria.

The training exercise, which will start at 7.00 am, will include a long walk from the Presidential Villa by President Jonathan accompanied by top government officials, Presidential aides, political associates, leading sports personalities and enthusiasts.

The programme, which will also include jogging, physical stretches and light aerobics, will culminate in a solidarity rally for President Jonathan at the Eagle Square organized by the Nigerian sports community.

Sports personalities expected to participate in the physical training exercise and solidarity rally include Mary Onyali, Austin Eguavoen, Kanu Nwankwo, Joseph Yobo and Chika Chukwumerije, amongst others. The event will be broadcast live on the Network Service of the Nigerian Television Authority. “

Check out photos of the fit couple below! 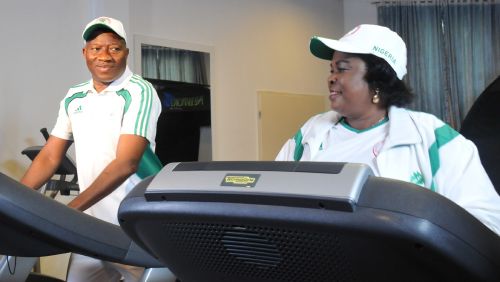 Ewon Adenomon: 3 Reasons Why You Should Quit Complaining About Challenges

‘Is it so hard 2 see black & blue?’ Salvation Army Uses #TheDress for a Powerful PSA against Domestic Violence