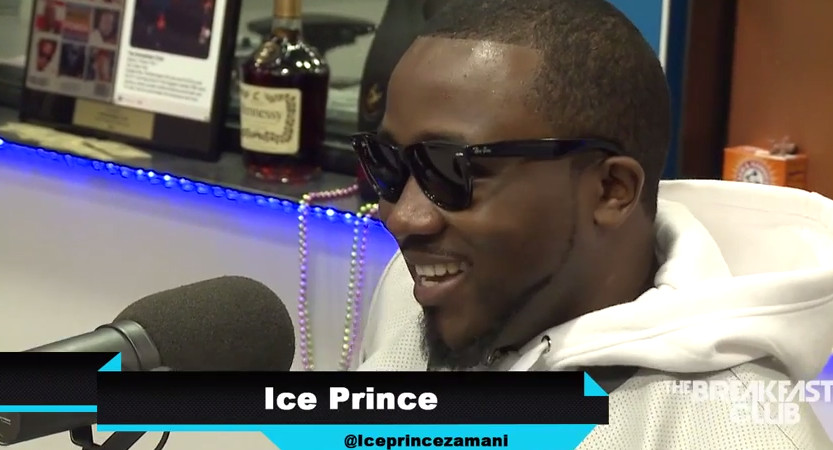 He dished on music, fashion, the weather and Boko Haram. When he was being introduced, one of the hosts said Ice Prince’s friend at Roc Nation, B-High calls the “Oleku” crooner the “Drake” of Nigeria.

He smiled, and said, “Yeah. He holds it down for me here. Shout out to B-High”

Read Excerpts;
On why American music is embraced in Nigeria, and Nigerian music is not celebrated in America as much: “I guess it is just what it is. America is a world power right. The President of America is like the President of the World, the most popular chef in America, will probably be the most popular chef in the world. But I feel like, America is still starting to open to other genres of music, I see reggae music is popping out here, and that’s dope. I see some of the UK artistes are popping here too, and that’s dope. I think Africans need to get that too.”

On if he felt pressured to leave Nigeria to become successful: “No. I have never had to leave. I still live in Nigeria. I just travel a lot, I’m just out there a lot because Nigerian music has gotten to a point where it is really, really blowing now. It is a huge market. Artistes are starting to make a lot of money. From the business, there’s a lot more bigger shows. There’s corporate getting involved, international companies getting involved, so stuff like that. So the market is getting bigger everyday.”

On Boko Haram: “Unfortunately. It is a terrorist group. They were disturbing peace. But it is a little bit calm now. Like Nigeria just got a new President, we just elected a new president. Congratulations to my country. my new President. General Muhammadu Buhari. He used to be a general. Anyway he is still a general. Once a general, always a general. He is the new President. We just pray that that stuff goes away completely.”

On the perception of Africa: “Unfortunately (When Charlamagne Tha God says over the years the pictures of Africa they’ve shown us is of kids with flies flying on their faces). Africa is beautiful, really, really beautiful. If you haven’t been there, you can only be as ignorant as anyone who has not been there. But like you said, South Africa is crazily nice. That’s one of my favourite places in the world after Nigeria. And Nigeria is beautiful. It is hot all year, it does not get too cold like that, we love it.”