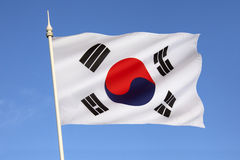 South Korean President, Park Geun-hye’s close aides, and some strong politicians are embroiled in a corruption scandal as their names were listed on a suicide note left behind by Sung Wan-jong.

The presidential office said on Monday in Seoul through Cheong Wa Dae, that anyone indicted after investigations would be made to face the wrath of the law.

The comments came a day after President Park urged prosecutors to strictly deal with the case in accordance with law thus indicating her willingness to punish whoever is convicted of bribery.

The prosecutors’ office formed a special team to probe the scandal.

The memo, which was found from a trouser pocket of Sung who killed himself on April 9, involved names and the currency figures next to the names, which strongly indicated bribes delivered to them.

The names included eight powerful politicians, including former presidential chiefs of staff  and Huh Tae-yeol, who said to local media that they would cooperate with prosecutors’ probe in good faith.

He was reported to have been engaged in the energy diplomacy corruption scandal, under former President Lee Myung-bak.

However, he committed suicide on the day when he was scheduled to appear in a court to determine the validity of arrest warrants issued for him.