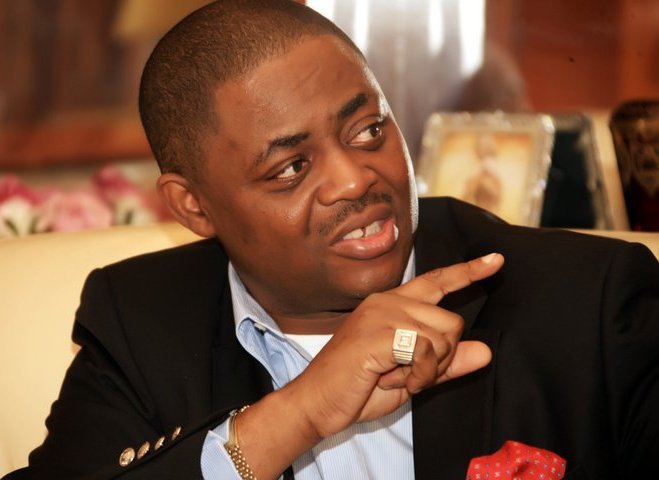 A Federal High Court in Lagos on Monday fixed June 18th, 2015 for judgment in the trial of a former Minister of Aviation, Femi Fani-Kayode, charged with money laundering.

Justice Rita Ofili-Ajumogobia fixed the judgment following the adoption of final written addresses and arguments by the counsel to the Economic and Financial Crimes Commission (EFCC) and the accused.

Fani-Kayode, whose trial began in 2008 before Justice Ramat Mohammed, was accused by the EFCC of laundering about N100 million while he was the Minister of Culture and Tourism and later, the Minister of Aviation.

The laundered sum was, however, reduced to N2.1 million on Nov. 17, 2014 after Ofili-Ajumogobia had dismissed 38 of the 40 counts leveled against Fani-Kayode by the EFCC for want of proof.

At the resumed trial of the case on Monday, the EFCC prosecutor, Festus Keyamo, urged the court to uphold the remaining two counts and to, accordingly, convict Fani-Kayode.

He said the former minister had failed to exonerate himself of the allegations.

Keyamo pointed out that the object of the charge was that Fani-Kayode transacted in cash sums above N500,000 which was the threshold stipulated by the Money Laundering Act.

He said that Fani-Kayode had personally admitted making such transactions in his confessional statement of Dec. 22, 2008 to the EFCC.

Keyamo said: “In this statement, he admitted that he transacted in cash above N500,000. My Lord, this statement went in without objection by the accused and the statement was voluntary.”

“With the combination of this confessional statement and the statement of the nvestigating police officer that investigated the allegations, we rely on all of these to submit that we have discharged our burden that monies were received by the accused in cash and were not done through any financial institution.”

Keyamo argued that the prosecution had discharged its duty once it established that Fani-Kayode transacted large sums above the Money Laundering threshold, adding that it was left for Fani-Kayode to explain the source of the money.

“Once you cannot explain the source of the large sums of money found on you, you are guilty of money laundering.

“If the prosecution must show where the money is coming from, then the whole essence of the money laundering law is defeated.”

“It is not in all cases that the burden of proof lies on the prosecution; the burden at this point shifts to the accused,” Keyamo added.

He further argued that the court could not simply believe that the large sums that Fani-Kayode allegedly transacted were proceeds from his father’s estate.

According to him, the accused should have called the tenant who paid in the money to testify in court and also back it up with his bank’s statement.

But Fani-Kayode’s counsel, Adedayo Adedipe (SAN), in his summary argument, maintained that Fani-Kayode made no confession to the EFCC, adding that the anti-graft agency had failed to show that Fani-Kayode actually accepted cash amounting to N1million as alleged in one of the counts.

Adedipe said the EFCC also failed to show to the court the person who handed over the money to the accused persons.

He said for the case of the prosecution to succeed it must be proved beyond reasonable doubts.

“My Lord, it is our submission that the accused does not have to prove his innocence; it is the prosecution that must prove its case beyond all reasonable doubts.”

The lawyer said the defence had raised doubts in the mind of the court regarding the veracity of the testimony of the EFCC’s witness, Supo Agbaje.

He said that Agbaje had earlier been declared wanted by the EFCC and subsequently listed as a prosecution witness.

Adedipe added: “My Lord, reasonable doubt exists as to what happened and that doubt should be resolved in favour of the accused.”

“Do we believe Agbaje, a man fighting for his liberty, for his life, who was remanded? Reasonable doubt exists in the testimony given by Supo Agbaje, who was declared wanted by the EFCC and later used as a witness.”

“Adedipe, while urging the court to discharge and acquit Fani-Kayode, said the EFCC had no case against him, but it was only striving to “show to the world that we have caught a big fish; but My Lord, there is no big fish here.”

Ofili-Ajumogobia, while fixing judgment for June 18, also granted an application to substitute Wale Ajisebutu with Ogbor Elliota as surety for Fani-Kayode.

The New Female Act Everyone is Talking About! LISTEN to Fefe – “Make Sense”