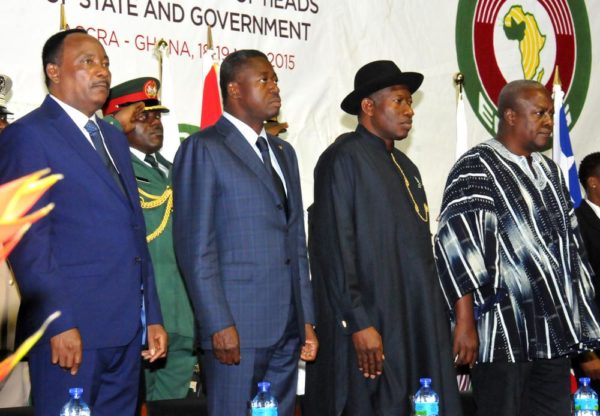 FROM LEFT: PRESIDENT MAHAMADOU ISSOUFOU OF NIGER; PRESIDENT FAURE GNASSINGBE OF TOGO; PRESIDENT GOODLUCK JONATHAN OF NIGERIA AND PRESIDENT JOHN MAHAMA OF GHANA, AT THE 47TH ORDINARY SESSION OF THE ECOWAS
AUTHORITY OF HEADS OF STATE AND GOVERNMENT IN ACCRA, GHANA ON TUESDAY (19/5/15).

President Goodluck Jonathan on Tuesday in Accra declared that democracy had come to stay in West Africa.

In his valedictory speech at the 47th Ordinary Session of the ECOWAS Authority of Heads of State and Government, he also urged regional leaders to support the incoming administration in Nigeria, led by President-elect Muhammadu Buhari.

He said recent elections held in Ghana and Senegal were largely peaceful without controversy, while polls in Benin, Sierra Leone and Togo had shown tremendous progress in consolidating democracy in the sub-region.

He expressed the hope that democracy would continue to bear abundant fruits in the region under the watchful guidance and nurturing of the regional leaders.

President Jonathan thanked ECOWAS leaders for their understanding and cooperation accorded him during his tenure as Chairman of the organisation from 2010-2012.

“The personal rapport and chemistry that I have enjoyed with each one of you, my brother and sister Presidents greatly facilitated the decisions that we were able to take and the concrete measures we took on behalf of our sub-region. As the new administration takes over, I am confident that the bond of friendship between Nigeria and each member state of our cherished Organisation and Nigeria’s role within ECOWAS will grow even stronger. I urge you all to extend the same friendship and fraternal cooperation that I have received from you to my successor.

The future of our Organisation and West Africa is in good, safe and capable hands. I shall, even out of office, continue to give my modest support to our noble cause of unity, peace, stability and development of our sub-region.’’

President Jonathan used the occasion of his address to highlight notable achievements of Nigeria in the quest for peace and stability in the region.

He recalled that as Acting President and Chairman of ECOWAS in 2010, the organisation was confronted with the situation in Niger.

“Happily, through dogged efforts on our part, we were able to resolve it and the country returned to democratic rule. Gen. Salou Djibo who oversaw the return to constitutional rule in Niger is today a student at Ahmadu Bello University in Zaria, Nigeria.’’

In Cote D’Ivoire, the President recounted that under his watch as Chair, ECOWAS followed through in its commitment to enduring democracy by standing firm behind the winner of the presidential elections in 2010.

“We are pleased that our brother, President Alassane Ouattara, took his rightful place and went on not only to provide leadership to his country, but also as Chairman of ECOWAS. Similarly, in both Guinea and Guinea Bissau, we remained focused on the goal of ensuring that viable political solutions were found for the political and security challenges that they were experiencing.That peace and stability and democratic governance have returned to these brotherly countries underscore our commitment to finding viable solutions to the problems of our Sub-region,’’ he said.

In the speech which was intermittently greeted with applause, Jonathan also referred to his recent visit to Mali for the historic Peace and Reconciliation Agreement signed in Bamako on May 15 by all parties.

He said “as co-mediator, I visited Mali and met with all the stakeholders in early and difficult times of the crisis in the effort to return to democratic rule, maintain peace and articulate viable political process.

He added that “Nigeria participated in all the negotiations and meetings coordinated by ECOWAS at various venues that eventually produced a political timetable for the holding of democratic elections in Mali.’’

He, therefore, commended President Ibrahim Boubacar Keita, the Government and people of Mali for the historic signing of the peace agreement and expressed the hope that the Accord would signal the end of the Malian crisis.

On the situation in Burkina Faso, the Nigerian leader urged stakeholders to stay firm on the political road map that had been agreed upon by all parties to ensure peace and political stability, ahead of the Oct. 11 presidential elections in that country.

Jonathan then challenged ECOWAS leaders to address the growing wave of young men and women in the sub-region undertaking  “very perilous journeys across the Sahara desert and the Mediterranean Sea to Europe. The phenomenon, given its hazardous nature, has claimed many lives and assumed humanitarian crisis.ECOWAS, in the first instance, should earnestly address this problem.

“At the level of member states, we should take necessary action to address the root causes of the crisis.’’

He also urged ECOWAS to table the matter at the forthcoming 24thSummit of the African Union (AU) in June in South Africa.

Related Topics:ECOWASGoodluck Jonathan
Up Next

Ngozi Okonjo-Iweala: It is Strange to Say $20 Billion is Missing from Excess Crude Account