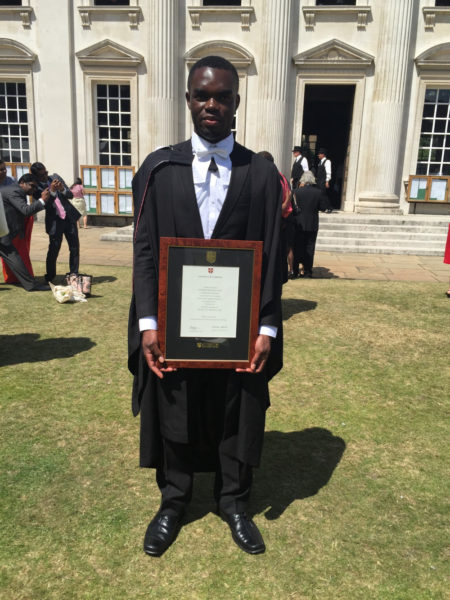 The star of today’s show is deserving of all the celebration we can muster because he has distinguished himself on three different levels of academic pursuit. Graduating from the Obafemi Awolowo University, Ile-Ife , with a first class degree, he went on to achieve the same feat at the Nigerian Law School. In June 2015, Onoriode Reginald Aziza  graduated from the Cambridge University with another first class degree.

Onoriode’s father is a retired civil servant, and his mother is a professor at the Delta State University. Talking about his parents, he says that his father counselled consistent hard work.

We love the raw honesty and brilliance of Onoriode’s story! “Although I had a penchant for childish excesses, good parental discipline and support from my siblings led me in the right path, and into starting my schooling at a tender age. I believe this gave me a spirit of extreme determination, a trait I believe, is my most distinct feature.“

Onoriode’s graduation ceremony from Cambridge University is on the 27th of June, but we couldn’t wait to get the photos. We will update this post as soon as we receive them.

But, when you read the story, you’ll know why our excitement knows no bounds. 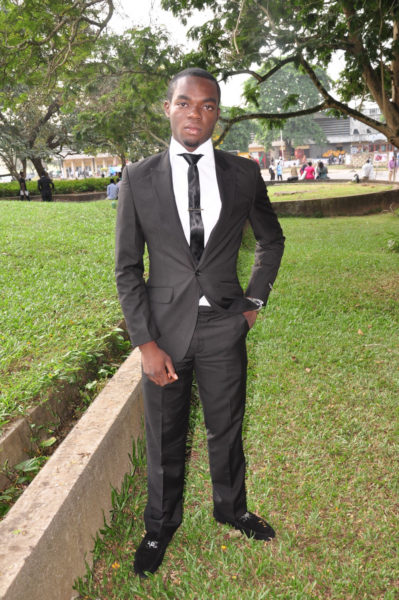 I Was Never a Genius
After strenuous struggles at the prestigious Kings College Lagos, I was admitted to study law in Obafemi Awolowo University at 15. Young, naïve and free-spirited, I took up the challenge of studying law – and a daunting challenge it was! My initial years were rough. I initially had a writing style used across all examinations, but wildly fluctuating grades quickly taught me to pick courses only after careful enquiry, and tailor examination answers to the tastes of the particular lecturers. After initial skirmishes with unpleasant grades, I later became consistent and my CGPA hovered around a 4.4 from the second semester of my third year until my very last result. The fact that I am the only first class graduate of the Faculty of Law in the last four years confirms the difficulty of the task.

The Daunting Feat of Law School
Proceeding to the Nigerian Law School at 20 presented even more challenges: I was forced to compete with my colleagues in the Yenagoa Campus and with the five other campuses of the Law School system; I was exposed to seminar-styled lectures sometimes running into six hours in length with only a thirty minute break, as opposed to the maximum of two-hours I was accustomed to in the university; I was compelled to challenge myself on a national scale against the best and brightest of students around Nigeria; and I was constantly reminded that as the best graduating law student from OAU, I had to replicate this excellence on a national scale. I had the benefit of fantastic lecturers at the Yenagoa Campus of the Law School who showed me the nuances of the system and how to make the most of it. After ceaseless hours of working through the year and during the externship programs, I sat the bar examinations and made my 2nd first-class and finished as the second best in Nigeria.

I recall joking with my friends that whilst I do not have the dexterity of Lionel Messi or Cristiano Ronaldo on a football pitch, I may have the ability to score a hat-trick of first-class results. The Faculty of Law, University of Cambridge was the venue, the flagship Masters of Corporate Law (MCL) Degree was the target and I prepared myself for an epic battle of intellect.

Challenges!
Funding a Masters in Cambridge is a big issue. Prior to resumption, and facing the prospects of having my admission revoked, I wrote ceaselessly to prominent Nigerians, Senior Advocates, Governors, Ministers and Governments, requesting funds and promising to be bonded in service to them or to the country upon my return if granted the funds. As expected, my entreaties were met with a mixture of deafening silence and tenuous, pontifical excuses. Thankfully, I finally secured a scholarship just in time to commence the program. 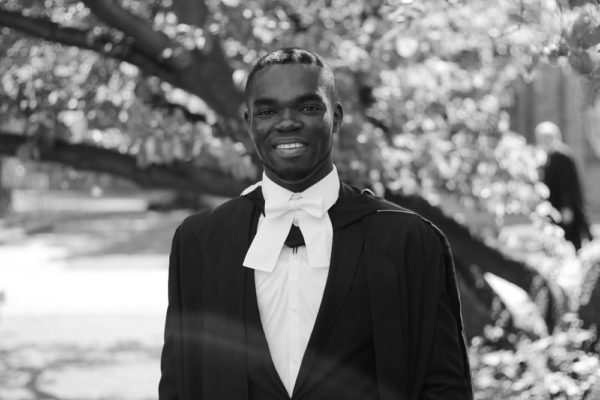 Cambridge and the MCL brought competing to an entirely new level. The minimum eligibility requirement to take the MCL was a first class in the university, and the course admits a maximum of 25 students in the world. With an eventual cohort of 23 students spread through 16 countries and all continents, including students who had concluded doctoral programs, and students working in the Central Banks and Securities Commissions of their home countries, I had no doubt that around and beside me were some of the best and brightest brains in their respective countries. The prospect of learning with and competing against them was scary and refreshing in equal measure. Whilst realism told me it would be difficult, optimism told me it is possible.

Lionel Messi of Academic Excellence! Hello Hat-trick
From my first breath in Cambridge on September 29th 2014 to my final examination on June 5th 2015, I was motivated by a single goal: ensure the world knows that the best students in Nigeria can compete with, and excel against the best students in the world. I had no precedents to work with as none of my friends who had finished from Cambridge before me made a first-class. Fortunately, I was classmates with an amazing senior colleague of mine from OAU (who like me, also made the first class in Cambridge). His presence gave me a compass with which to navigate the academic seas of Cambridge amidst the tumultuous waves of a crashing Naira exchange rate, without sinking my boat. 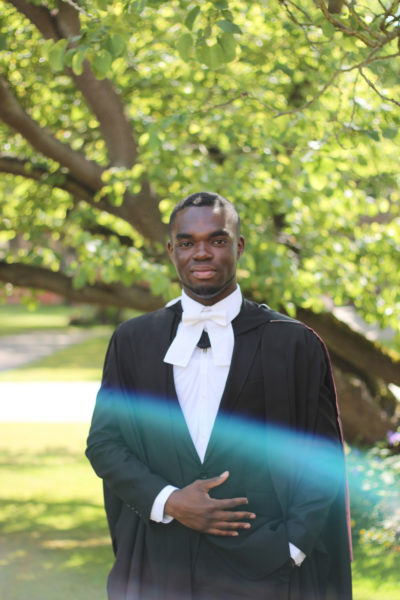 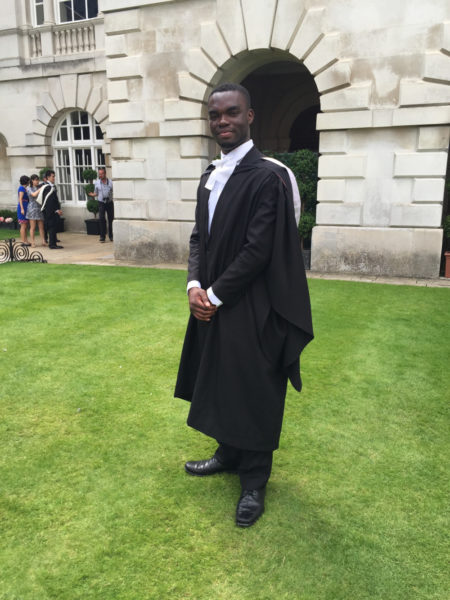 Whilst ensuring a realistic sense of what was important, I ensured I made the most of Cambridge. I traveled, met new people, explored and experimented (sometimes determining not to eat the cuisine of one country more than once in a particular week)! I secured vacation placements with law-firms in London, attended balls, garden parties and formal dinners, undertook a pro-bono project with the Law Faculty, served food to the homeless on the streets of Cambridge, and locked myself in the library when needed. At the end of the second term, of my 4 courses, I had secured 3 first class results and 1 first class with distinction. Mathematically, even with a term left, the deal had been done, and nothing but an absolute shipwreck in my final term could deny me the hat-trick. The final term went just as well as the previous terms and finally, the results were officially released: I had my 3rd first-class in the bag, and I was just 23! The 1st first-class felt good, the 2nd first class felt great; the 3rd was outright emotional: saying I was on the Mt. Everest of ecstasy does not do justice to the feeling!

Keep Raising the Bar
Borrowing from the wisdom of an old English judge, it appears that those with a taste for fairytales seem to think that in some Aladdin’s cave, there is hidden a virtue variously called ‘natural talent’ or ‘genius’ and something in the art of reproduction confers it on some children and not on others, which makes them excel better than others. Whilst I cannot attest to the truthfulness of this claim in other disciplines, I know it is non-existent in law. I can attest to the fact that I was born with no knowledge of commercial law, civil litigation, or competition law: knowledge of the law resides in the pages of books. I thus believe, as did Justice Melville Fuller of the US Supreme Court, that “the world furnishes many examples of the superiority of the truly earnest and laborious mind over the merely intellectual.” Academic excellence therefore does not reside in in-born gifts but in unrepentant effort. Irrespective of your circumstances, I urge you to set the goal, raise the bar, and pursue. Dreams are neither too big nor goals too high, but minds are either too small to conceive them or arms too short to achieve them. Yes, you can!