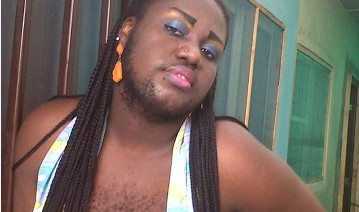 In a recent interview with Punch, Okafor spoke about her hairy appearance, her numerous suitors, other affairs of the heart.

“I get not less than 100 suitors and admirers everyday depending on the occasion. Married and single men, boys, girls, lesbians and gay men are attracted to me. But I can’t accept every person that approaches me because people are very deceptive.

Some men will tell me that they are not married, whereas they are married with children at home. I am not married, but I intend to get married one day because that is the prayer of every woman, but definitely not to a married man. If God answers my prayers, I will be happy to be married to a businessman that will love me and not be one that will beat me.”

On her past relationships

“I fell in love with one man, but I detest men that don’t tell the truth, I was in love with him but because he was a womaniser, I decided to dump him. On several occasions, he tried to seduce and sleep with my younger sister. My sister told me about this. She said whenever she was asleep, he would sneak into her bedroom and attempt to sleep with her.”

On her hairy appearance

“It is a family thing, especially from my father’s side. So, if I get married, I won’t be surprised to see any, if not all of my children, having hairs all over their bodies.

Read the entire interview on PUNCH